Last weekend was WONDERFUL because I got to see my best friend! 😀 Aria just got married (joy!) and moved fifteen hours away from me (sadness…). But recently she came to visit us with her husband Andrew, and Andrew’s best friend, Fleet. It brought back so many memories, like her proposal/engagement, her wedding, and the first time she visited our farm in 2018.

We had a blast exploring the farm, building a dam in the creek, making too much food, finding strange creatures, etc. Enjoy some of my favorite pictures!

The first pictures I have are from Saturday morning, when Aria, Andrew, and Fleet came over from our guest house to have a late breakfast with us and then go on a little tour of the farm. 🙂 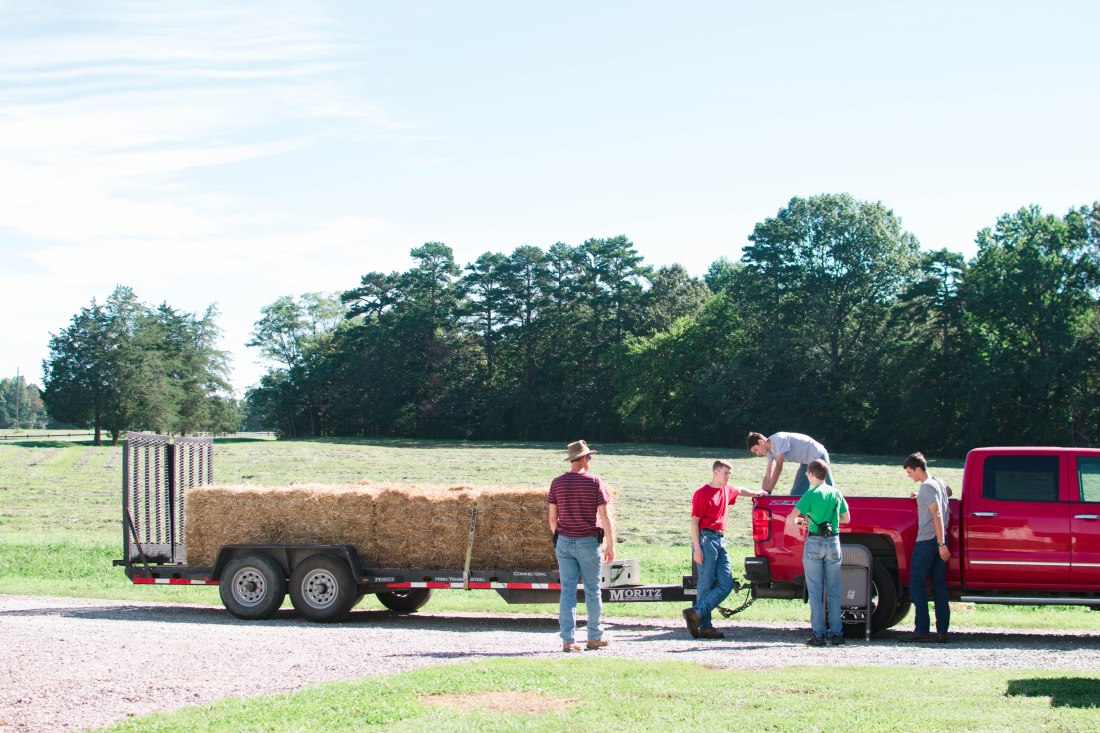 We stayed at the shop for QUITE a while because Dad and Andrew got to talking about tools and machines and would have stayed there all day if we didn’t pull them away. :’D Maggie didn’t mind because she got so much attention, especially from Fleet, who is probably now one of her favorite people. XD (Also someone put a shop rag on her back in this picture…?)

After we pulled the guys away from the shop, we went to the rebaling shed and then the huge hay barn. Fascinating again. 😀

The rest of my family had a party to go to that afternoon, so Aria, Andrew, Fleet, and I went over to the Cedar House (guest house) for lunch. Aria and I listened to Hamilton while we made fried rice. 😀 We accidentally made enough to feed a small army, a.k.a. my whole family. Oops. 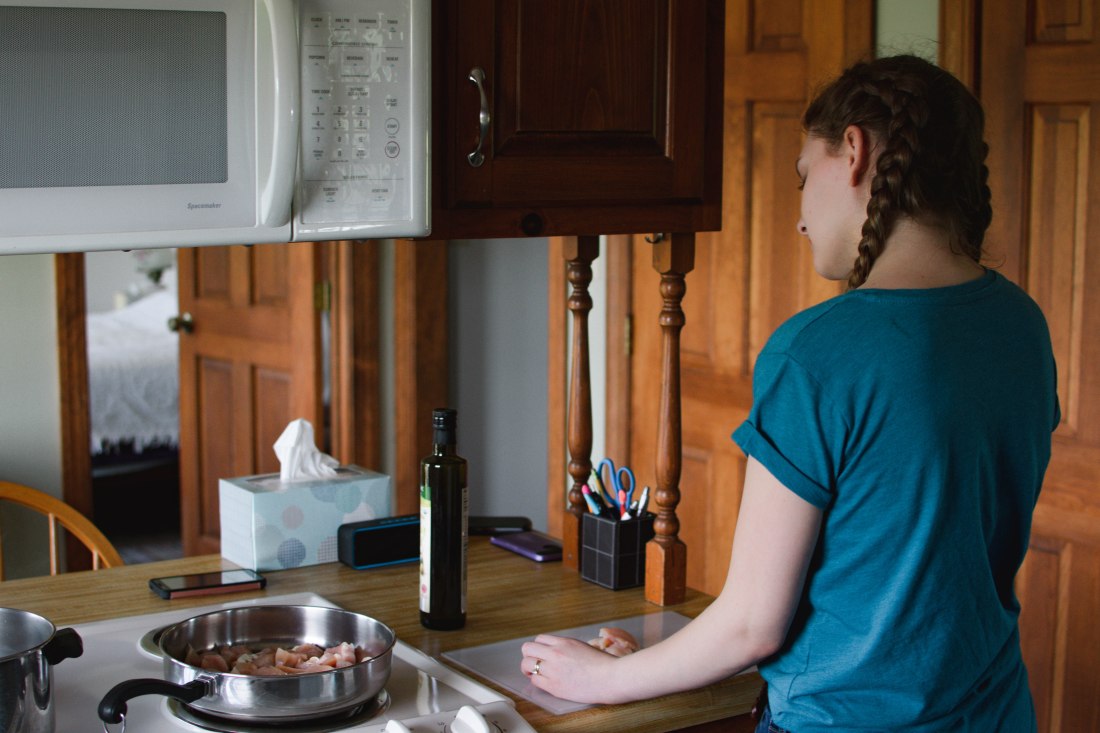 Aria rapped “Satisfied” for us (*applauds*) and we finished lunch, then went for a Mule ride. (The Mule is a vehicle, not an animal, in case you were confused.) Aria drove us around the fields and pastures with some navigation help from me. Much fun. 🙂 Right as we came back to the house, the Mule stalled and stopped working. Soooo we just walked after that. And Aria & Andrew tried out the swing. 🙂 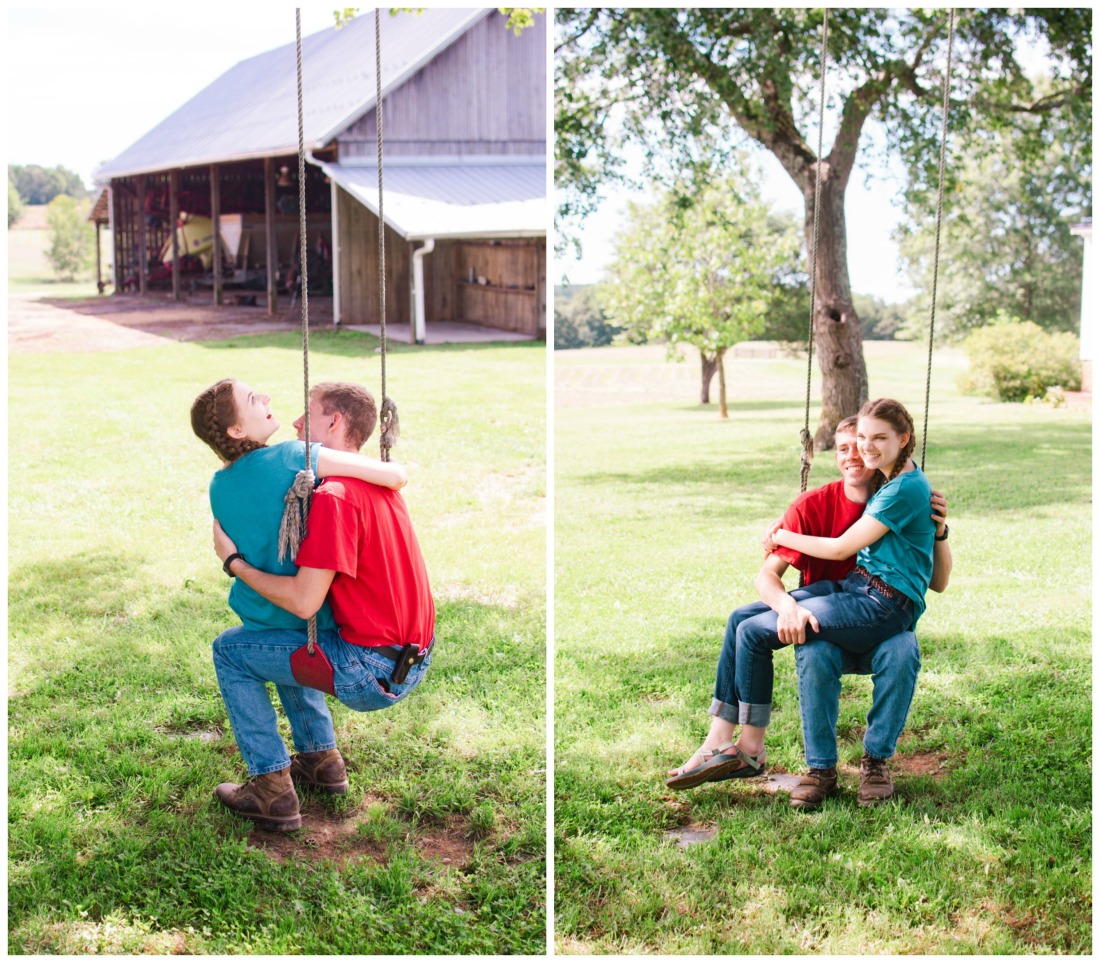 We went down to the creek and then up again, finding a toad, butterfly, and a slightly disturbing caterpillar thing with furry antennae. The poor thing got paparazzi-ed with a mini photoshoot, a couple cameras, and different angles for posing. :’D And then we forgot to look it up. Shucks. 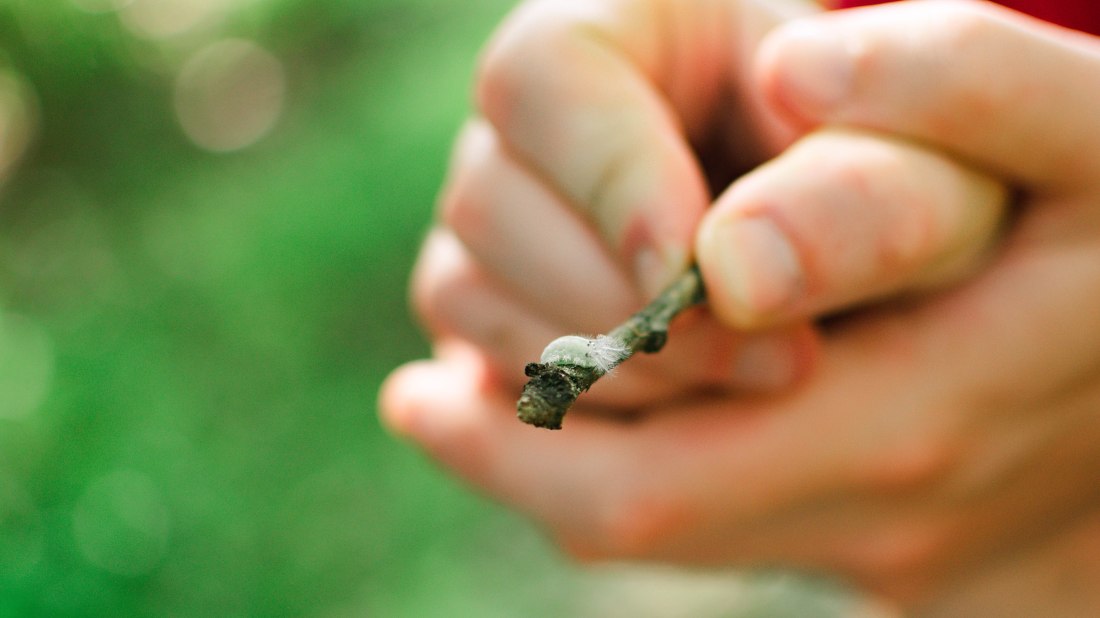 After climbing up the hill, we decided we needed some watermelon to refresh ourselves. AND I GOT THIS PICTURE. WHAT ON EARTH. I’m not sure whether to collapse with laughter or run away.

Anyway. Aria and Andrew are the photographers for my friend Bethany’s wedding in October, which I am SO excited about. Because 1) My friend is getting married! 2) I can see Aria again! 3) the wedding is going to be on our farm! :O

So yeah, A&A took some engagement pictures while they were here. I sneaked in a few photos too, but I’ll save those for an Etcetera post (which I really need to make, yikes). In the meantime, here are some behind the scenes photos. And go check out Aria’s stunningly beautiful professional photos here.

Guys, it was basically the best weather ever that day. I mean, look. ❤ And OOH YES. We all had supper + a bonfire after that, and Fleet showed me how to take star pictures! They turned out SO well. But more about that later because this is already too long. I think you guys are going to love the next post. 🙂

After going to our church on Sunday morning, everyone but my parents went for another Mule ride. The boys fixed it from the previous day, but then JEFF GOT US STUCK IN THE MUD. In a place where that ALWAYS happens. Don’t say I didn’t warn him. *shakes head amusedly* We finally got it out with the winch, and then decided to give it a break and explore the creek again.

This is when we decided to build a dam. And this is where I got the most pictures, so… hold on! 😀

Maggie was THRILLED to go on an adventure with so many people. ❤ 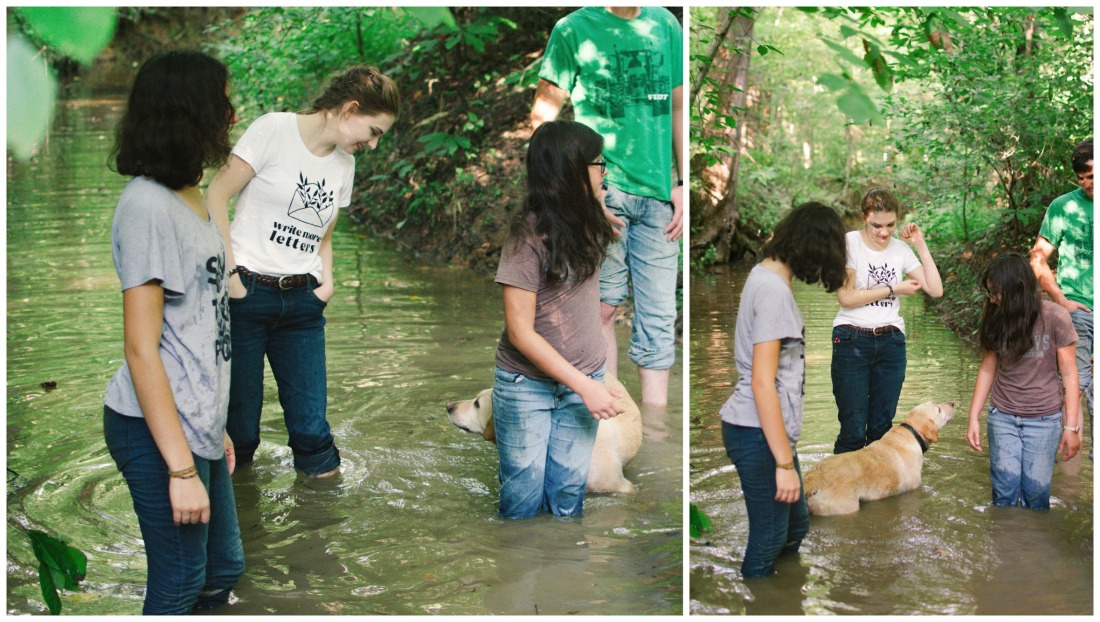 After some scouting, we chose a fairly narrow, shallow spot in the creek and started construction. Fleet did the engineering since he had a cast from a bike racing accident, and the rest of us brought in rocks and sand to build it up. 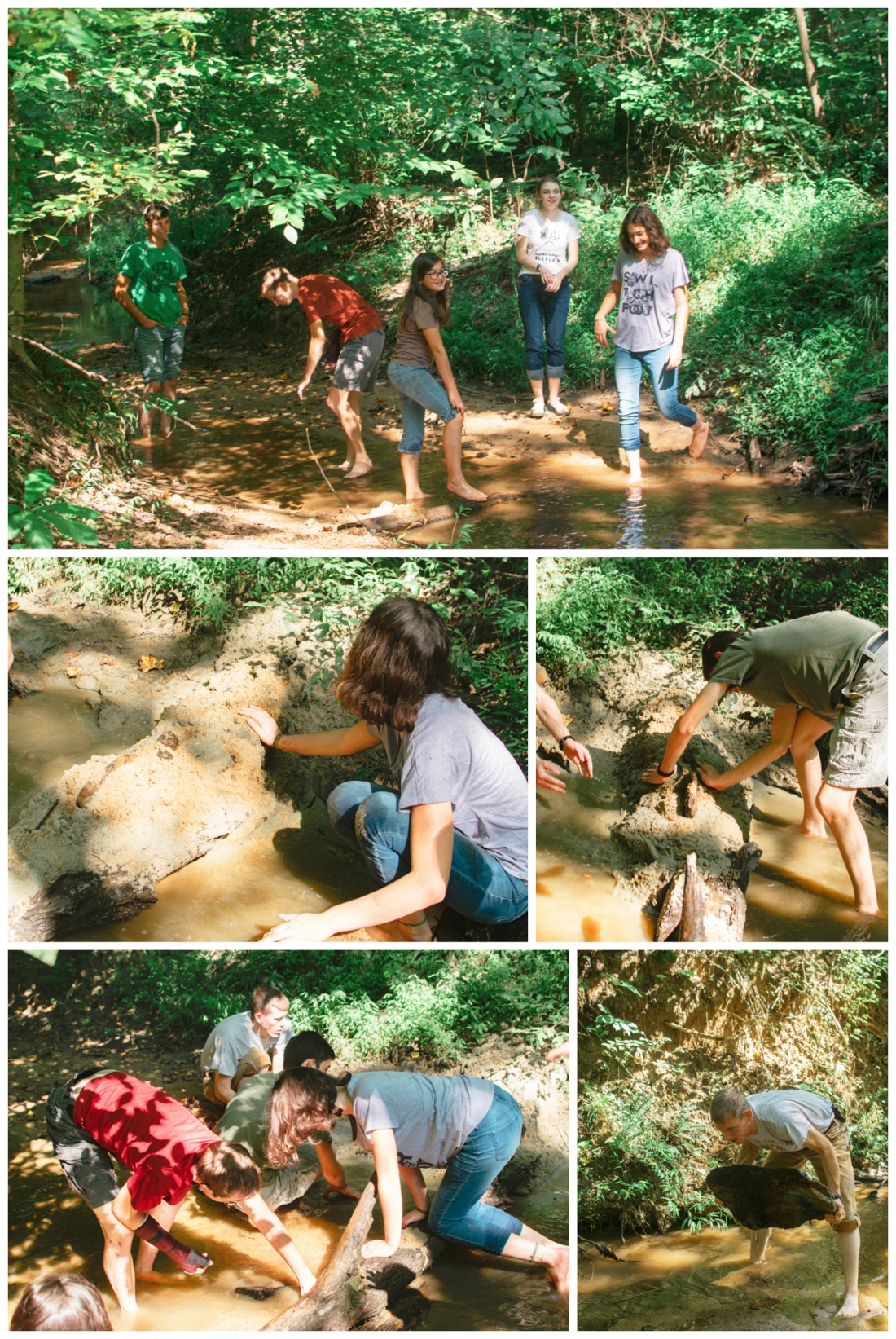 We had so much fun with this, ahh. Fleet and Andrew were master creek dam builders/engineers, so we ended up with the best dam we’d ever built. 😀

Also I think maybe Andrew is related to Dad somehow because they share an affinity for making large quantities of TERRIBLE puns. Which somehow set off long chains of poor-quality jokes from all of us. There was a lot of laughing/wailing/groaning going on. :’D Oh myyy.

After about an hour of building, Mom and Dad came down, bearing a shovel, which the boys took turns wielding to finish up the dam. You can’t really see it from the picture, but the water level was quite a lot higher behind the dam than in front of it once we were done. We wanted to wait till the water went over top, but realized that would take forever. Instead, Andrew and Fleet dug a small channel and we let the water go through and even out again. 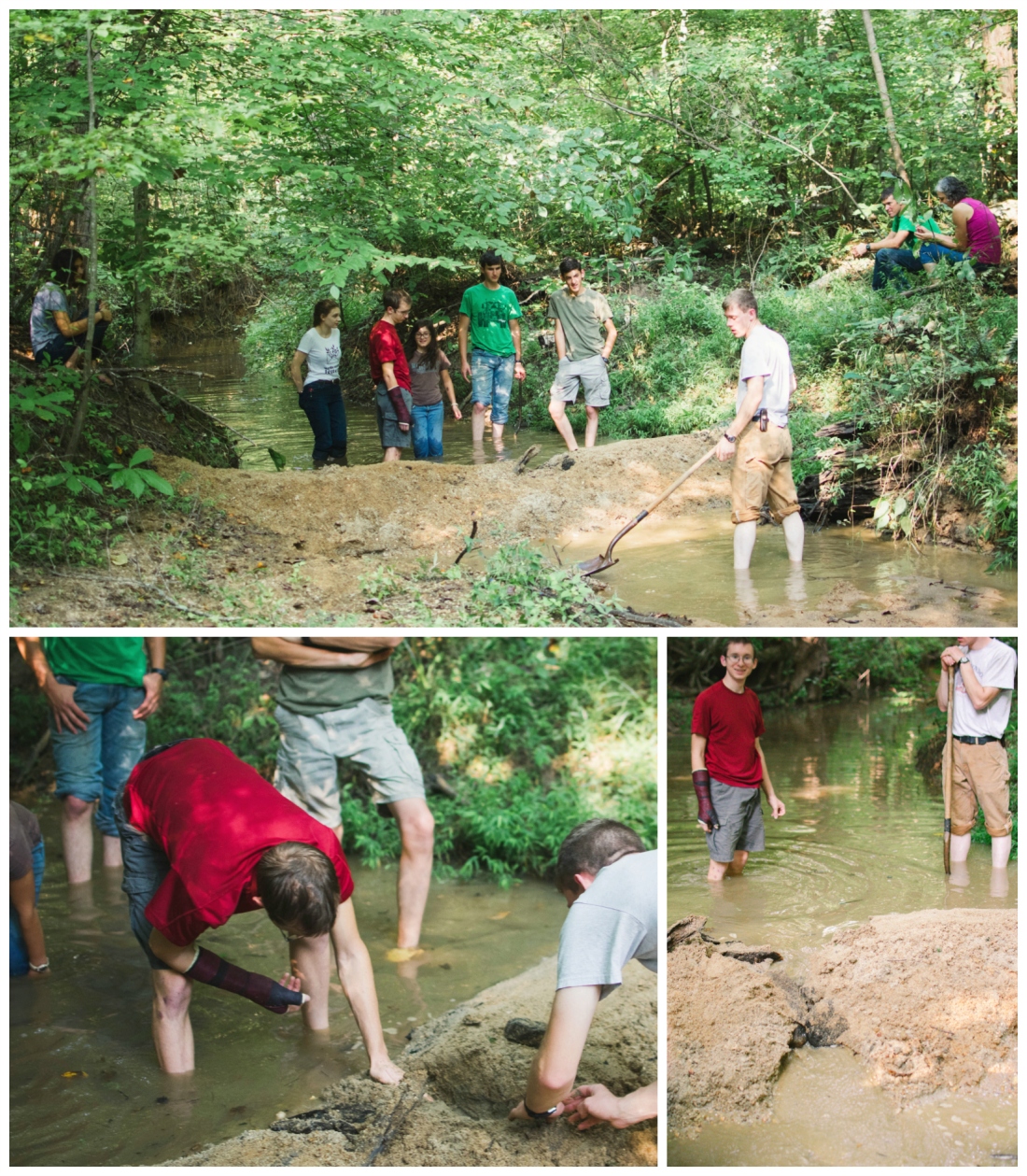 Oh yes, I almost forgot this (very dark) picture! During a short break, I collected some leaves and decided to give Aria toe feathers, which are definitely a thing. *grins* Aren’t they a masterpiece?

Eventually we went back up to the house for supper and another bonfire. (See, this is the Mule I was talking about.) We managed to load it up with ten people. 😀 For some reason I just love this picture! I’m not the best at editing woods pictures, but I think this one turned out well. 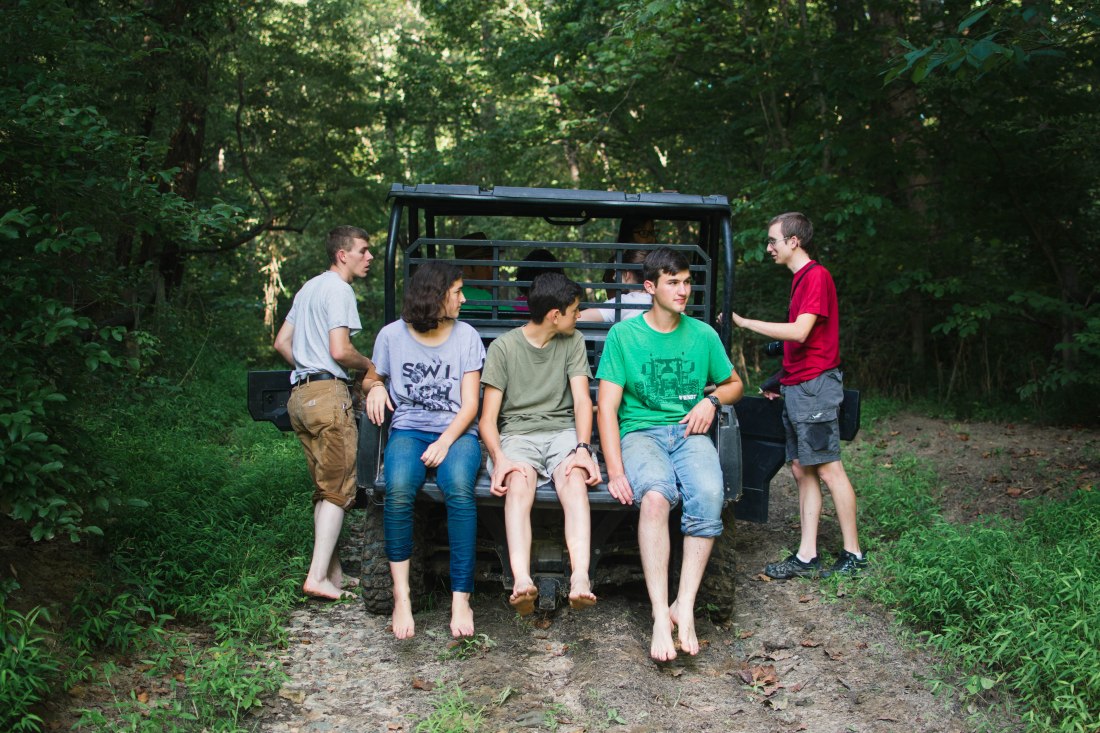 A&A went back to change out of wet clothes before supper. I briefly taught Andrew how to drive the four-wheeler so he could take Aria back. They were both pleased, as you can tell. 😀 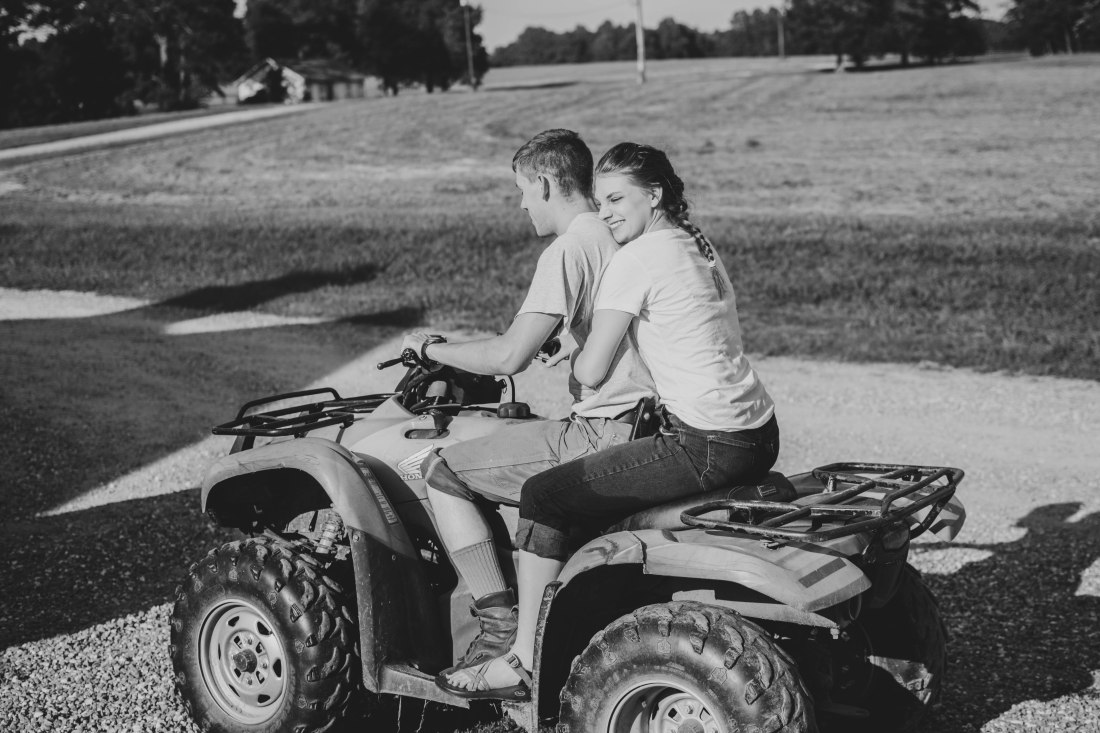 We ate supper, stoked up the bonfire, and sang some hymns, and then came back to the house and taught them how to play Pyschiatrist, which is one of our family’s favorite group games. 🙂 Oh, and sometime that weekend Carmen and Andrew played chess. They’re both great at it and almost evenly matched, as Carmen spends a lot of time on Chess Kid practicing and watching tutorials. Andrew ended up narrowly beating her after a long and intense game that was quite fun to watch. 😀 (Also Carmen’s expression here… XD)

At last they all had to leave on Monday morning. 😦 I went over to the Cedar House to have a steak and eggs breakfast with AA&F, which was quite tasty! I’ve never had steak for breakfast before. We came back to our house to get one last picture to keep up the tradition before they left. Here’s a comparison.

And that was the weekend! It was so, so fun to see all of them again (but especially Aria – sorry, guys! 😛 ) and we made so many new memories. I hope you enjoyed seeing the pictures, my friends!

Do you have a favorite picture? Have you built creek dams before? Did you check out Aria’s post?

P. S. Photos taken with my Nikon D3400 and a 35mm lens. Edited with Lightroom and picmonkey.com.

42 thoughts on “Creek Adventures, Terrible Puns, and a Marvelous Weekend”