Yay, I finally get to share some of my favorite recent photos! Our cousins from Canada stayed at our house over New Years and we had many lovely adventures with them that will have to last us until we see them again. 🙂

If kids (and sometimes) adults come over to our house and want to go outside, there’s a high chance we’ll take you to 1) the hay barn (basically an enormous, extremely dusty playground), or 2) one of the streams (which can provide hours of entertainment as well). As a bonus, they both make for some pretty fun pictures!

Enjoy this collection of sunbeams and hay bales and warm winter adventures!

There’s a huge pile of hay bales at one end of the barn where the sun streams through cracks in the slatted walls. When the light is right and someone stirs up the dust (like my brother driving the skid-loader around to pick up bales), all sorts of magical things happen if you’re a photographer. 🙂

LIKE THIS. Gahh, it almost took my breath away in real life it looked so picture-perfect! 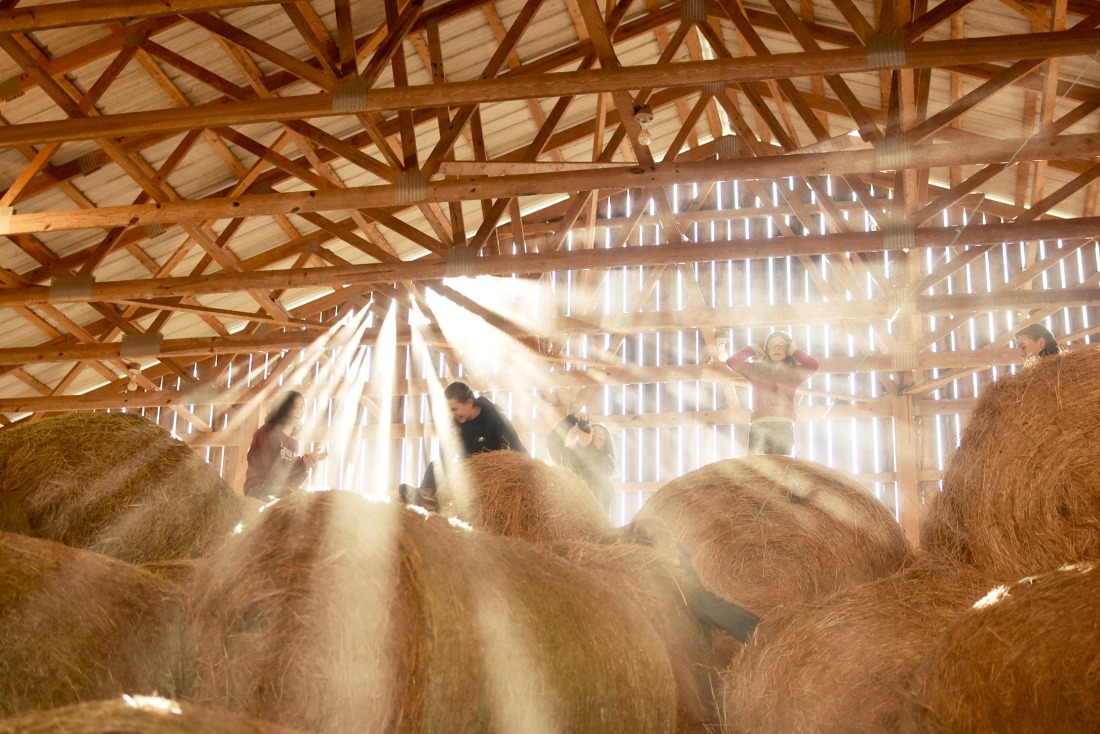 Heh, not sure what Jeff was in the middle of doing, but it must have been something heroic because he’s radiating quite the glow. XD 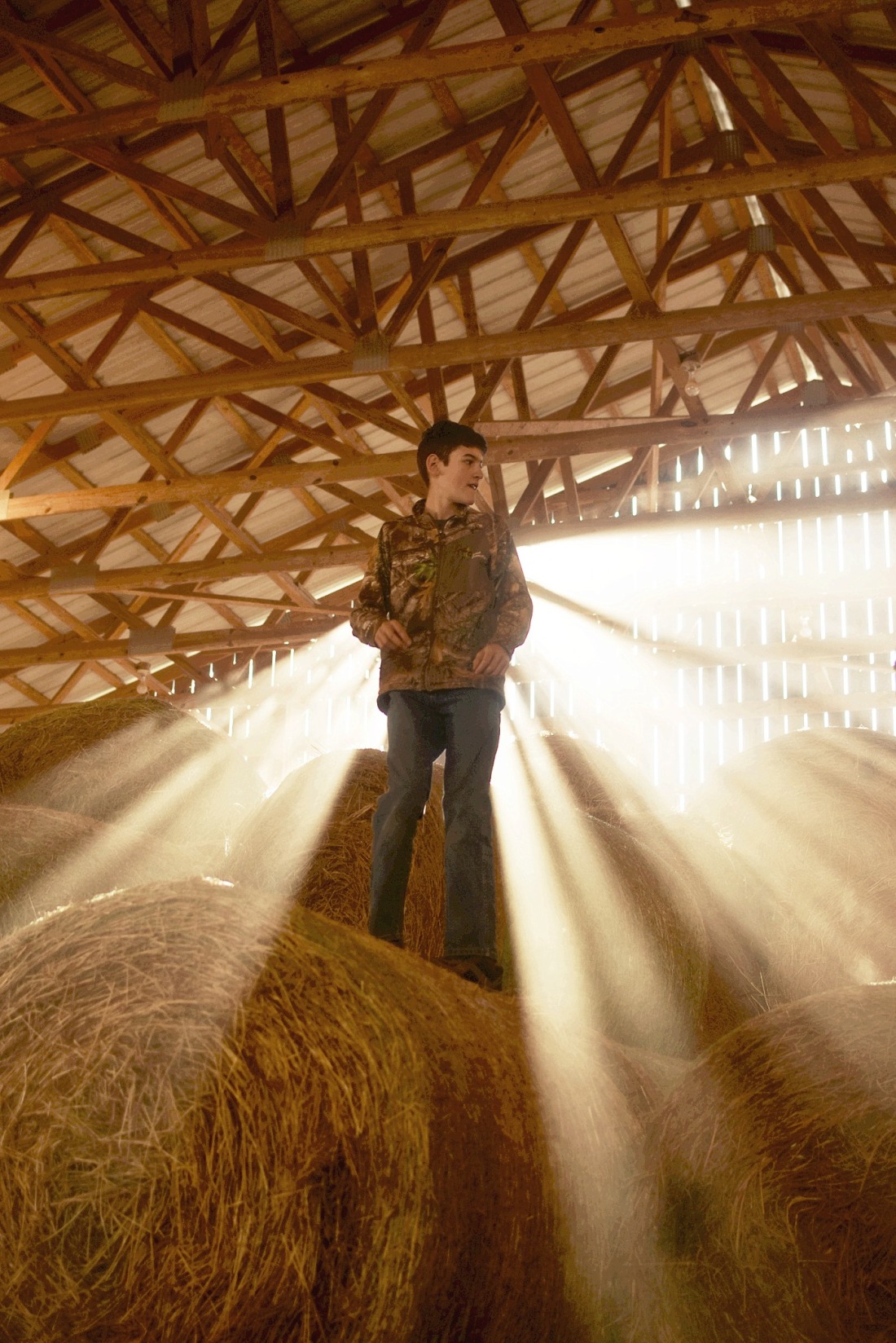 It looks like something from a comic strip, doesn’t it? Just needs some sound effects… POW. 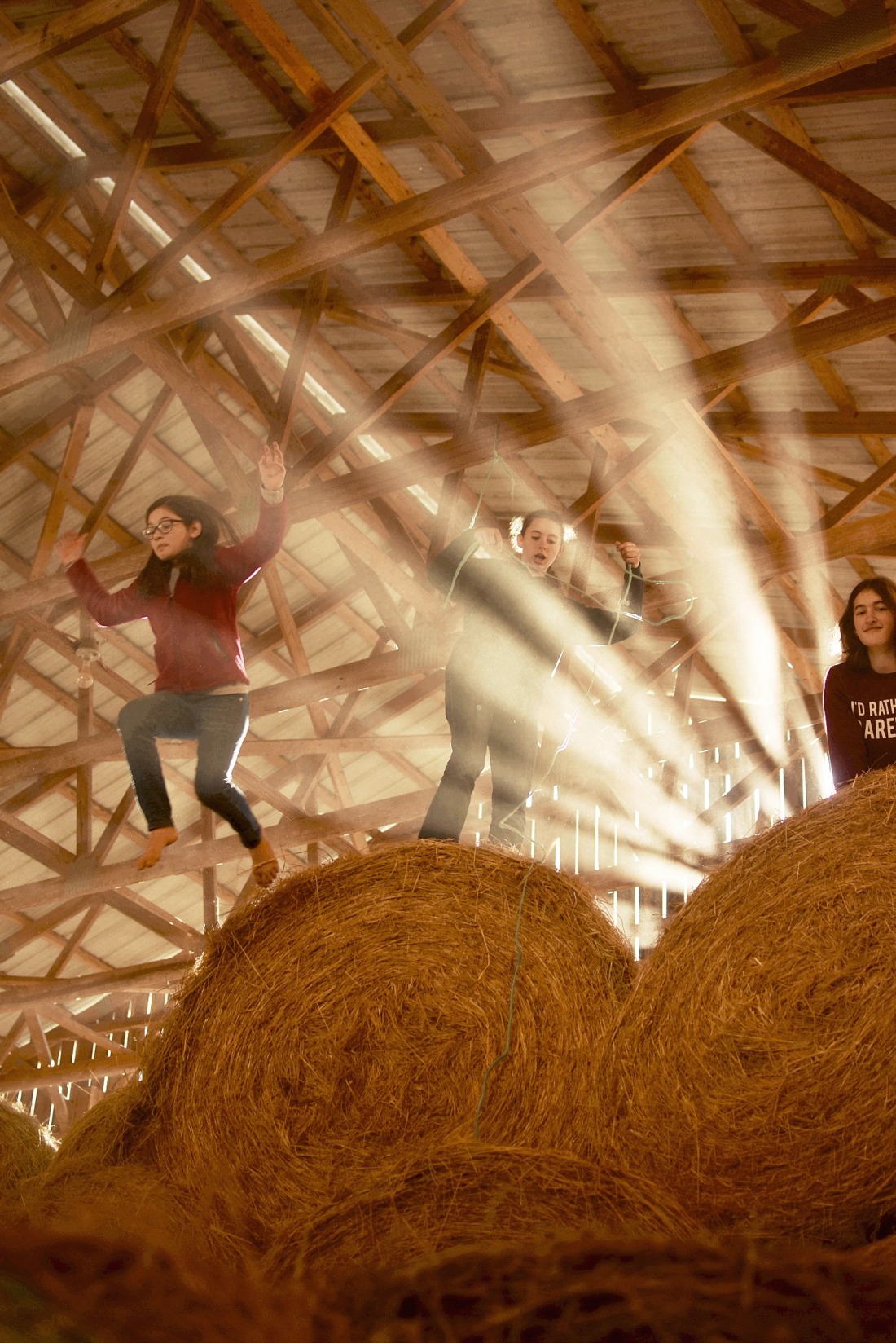 BAHAHA, I just realized it looks like Clara is about to kick Graham on the head. :’D 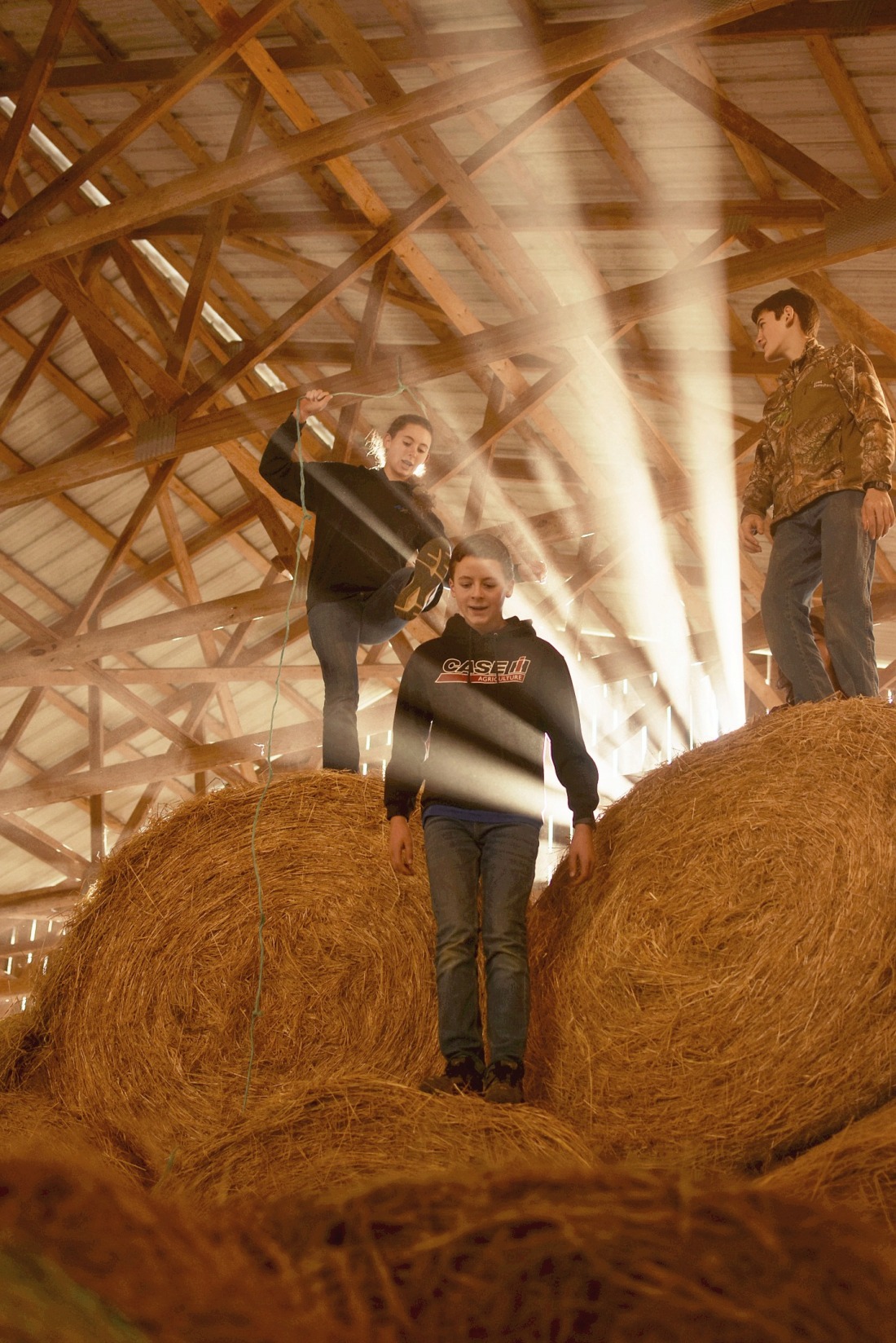 Ohhh my goodness, I absolutely love this lighting! *heart eyes* And it wasn’t even golden hour, though it looks that way: warm and cozy, like I should curl up on a bale with a book. Except I have a nasty cold right now and it’s chilly and gray today, so I think I shan’t. 😛 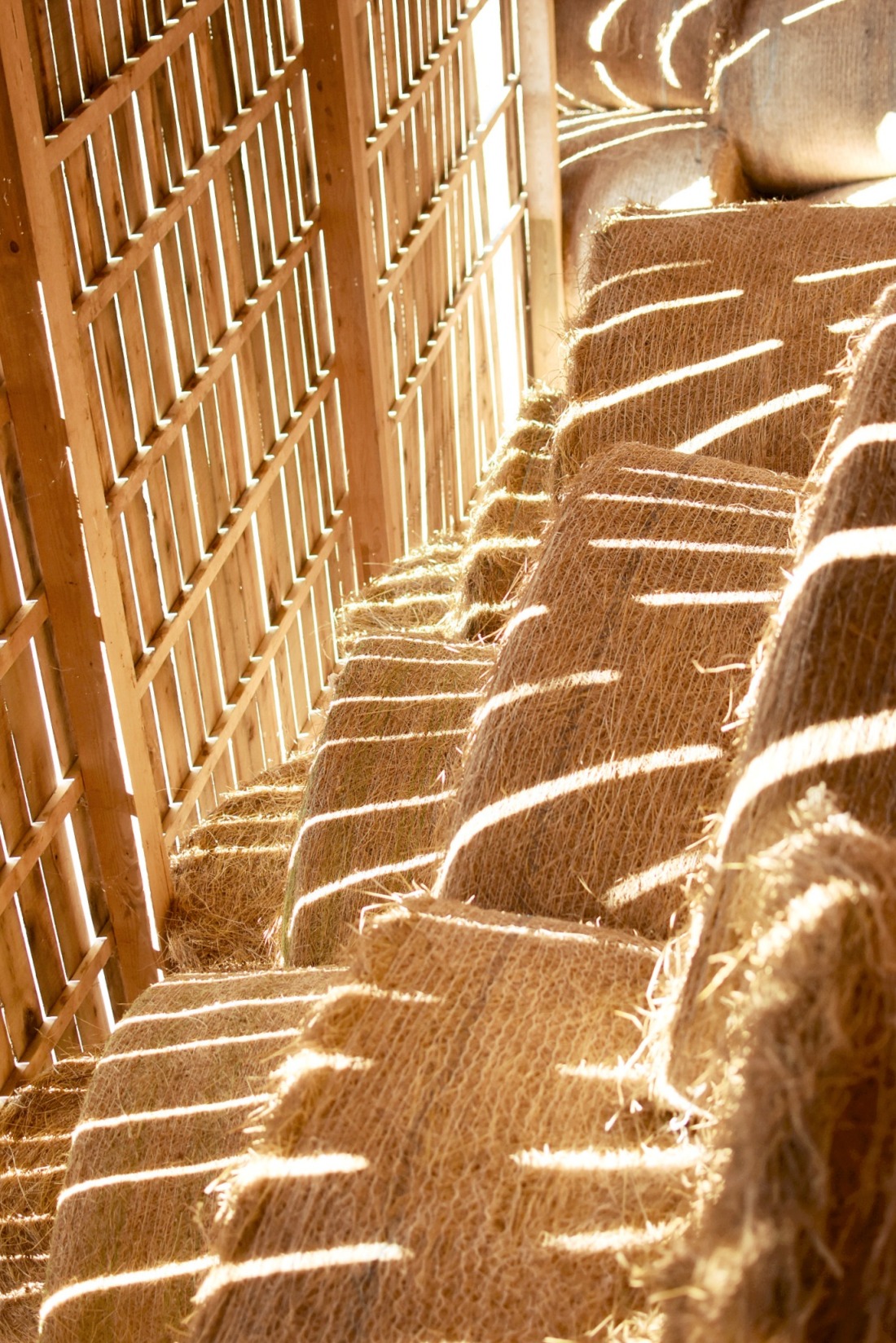 It was surprisingly warm for January, though – so much so that several of us took off our shoes for better climbing grip. (You have to be careful with that, though – Megan once lost a shoe down a deep crack between bales and didn’t get it out for days. XD)

Whoa, the dust looks like white glitter and Logan looks like he was outlined in white gel pen, like I do sometimes in art. Gotta love backlighting.

OOH I LOVE THIS ONE. The bokehhhh! 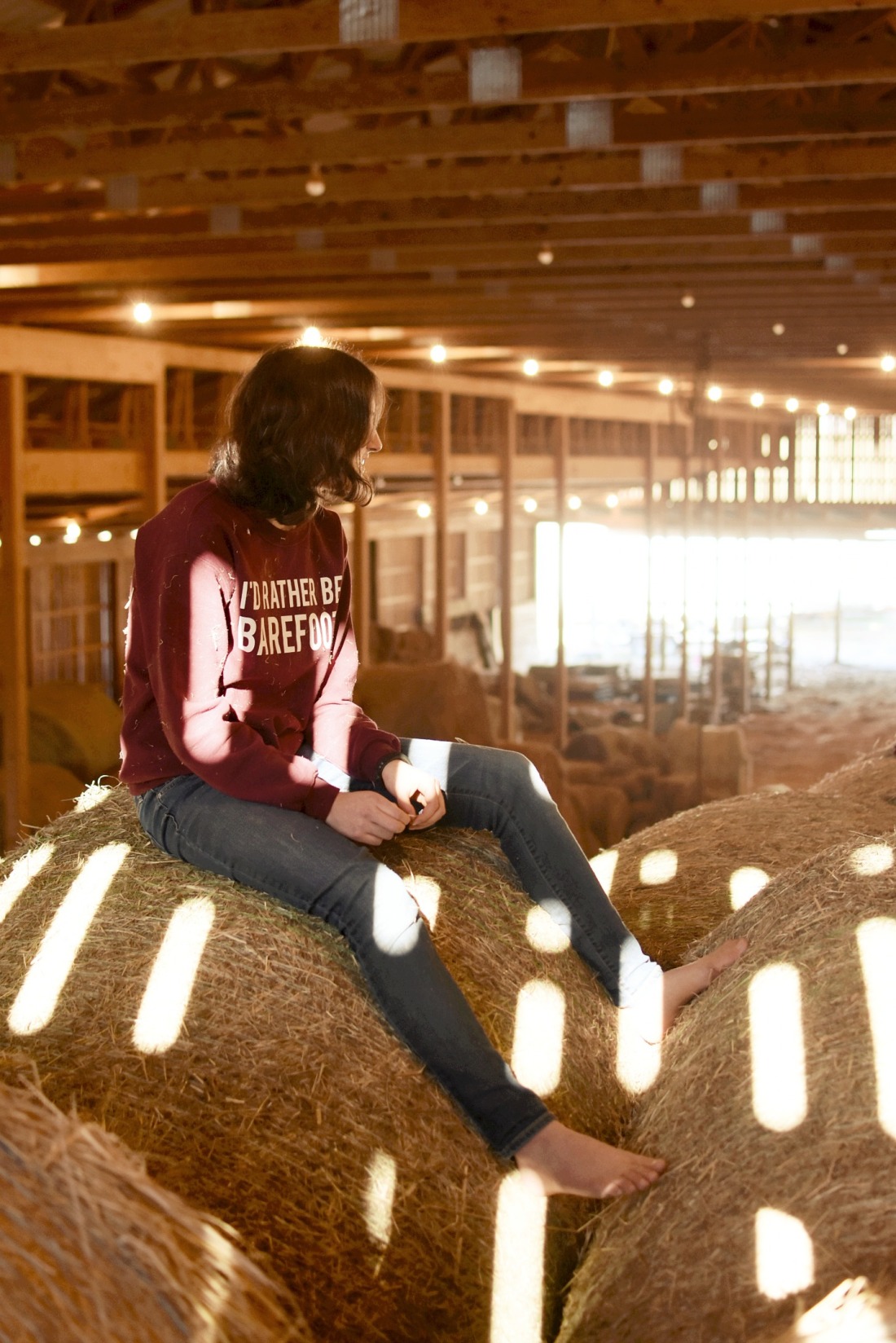 I don’t know how the slatted walls cause all these speckles and spots, but I find them fascinating. It reminded Abigail and I of last year when we took pictures in the hay barn together. Remember that post?

Heh heh, not exactly sure why Graham is sporting this look, but… it came in handy later that day. 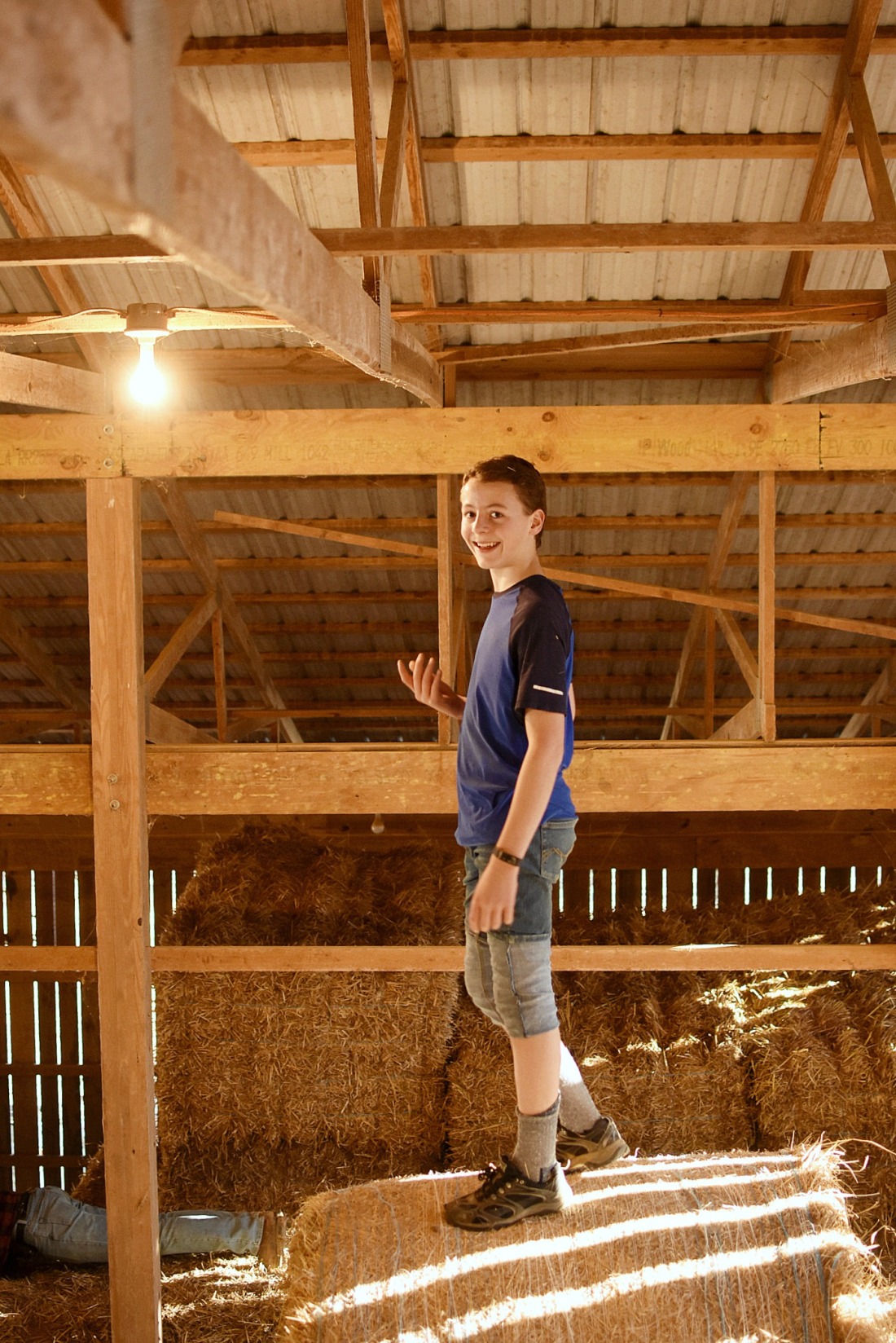 After a while of clambering about the bales, my cousins, Abigail and Clara, and my brother, Logan, had a pushup contest. Heh. My cousins play a lot of sports and MAN, can they do a bunch of pushups! I, on the other hand, didn’t even try (but only because someone needed to document the event, of course *nods seriously*).

Afterwards (or maybe before), they did a chin-up contest using the barn rafters. :’D It was quite amusing to watch, hee hee. I don’t remember who won that one… maybe Jeff, or Abigail again? 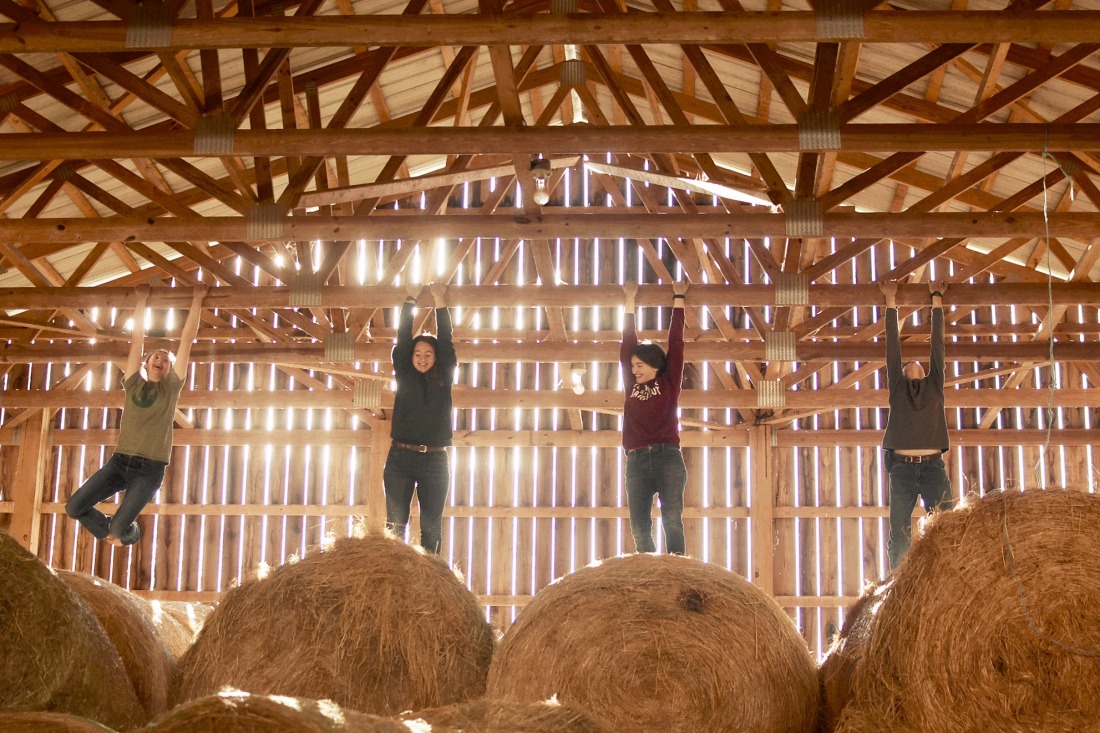 After we finished up at the barn, we drove the Mule (UTV) down to the stream to explore a bit. And, since it was so warm (I don’t remember exactly – maybe around 60 degrees Fahrenheit or something?), what did we do but take off our shoes again and go wading in the stream! :’D

The air was… ahem, not quite as warm as the air. Our cousins were like, “we would go SWIMMING in water this warm,” but the Americans in the group disagreed. :’D Megan would rather not be barefoot, as you can see.

However, we stuck it out (because… I don’t even know why – kids these days XD), and found an uprooted tree laying down in the water. So we decided to “replant” it. Heh. By propping it against the fork of a currently living tree and wedging the roots in the water, we got it to stand up! *applauds* For a few seconds, anyway.

Finally we’d had enough of the water and made our way back to warm our feet again.

And then comes the poor Mule’s part of the story. It always seems to be breaking down and at that point my brothers and Dad had fixed it halfway, so it ran, but without much power and at a maximum speed of about 15 mph. When we went up the hills… well, it pretty much gave out, despite our shouts of encouragement and some people getting out and walking instead. :’D At one point it said 0 mph but we were still going. It was… slow. BUT WE MADE IT. 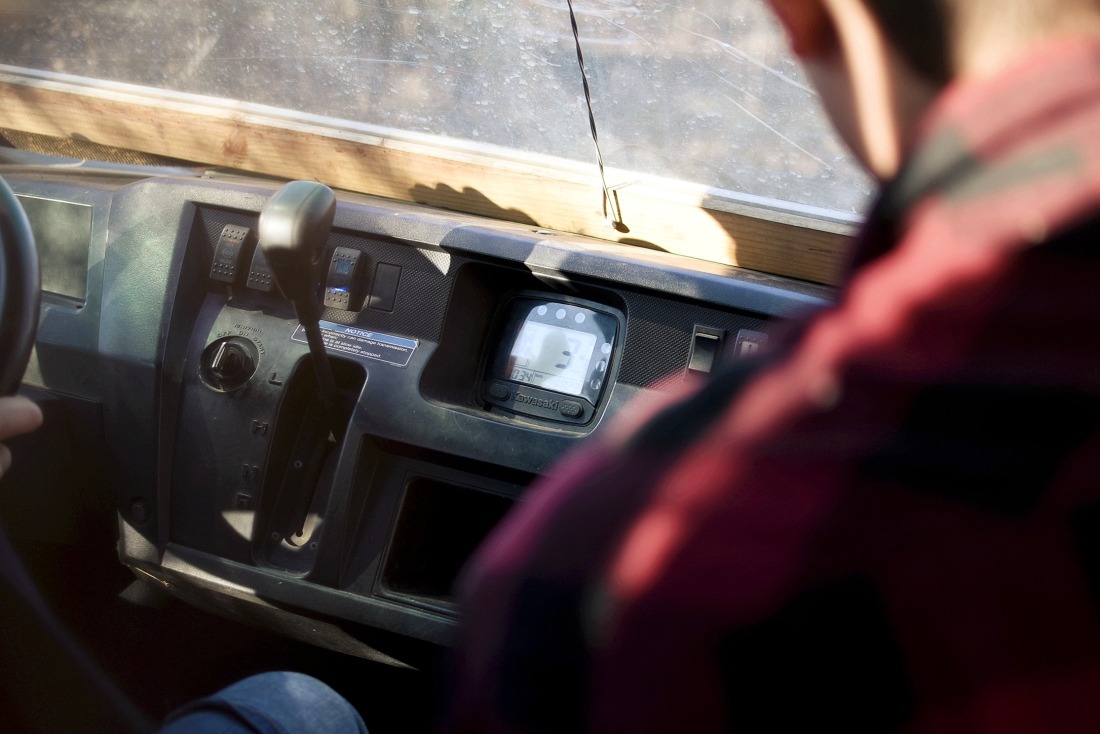 Annnd then we looped around and came to one of the steepest hills on our farm and, yeah, the Mule nearly acted like its namesake animal and laid down in the road and refused to move any further. BUT! We were ready! Jeff extended the winch (a line and hook) so Logan and Graham could pull from the front, and a couple of the girls pushed from behind, the rest of us loudly encouraging the general public. AND WE MADE IT. :’D Bahahaha, it was great.

Well. After we finally made it back to the house, we visited the “pet barn,” housing our chickens, bunnies, and Eeyore, Megan’s donkey. (Not to be confused with the Mule, although she moves about as fast when you try to ride her.) We brought the bunnies out for some extra fresh air and sunshine and love. 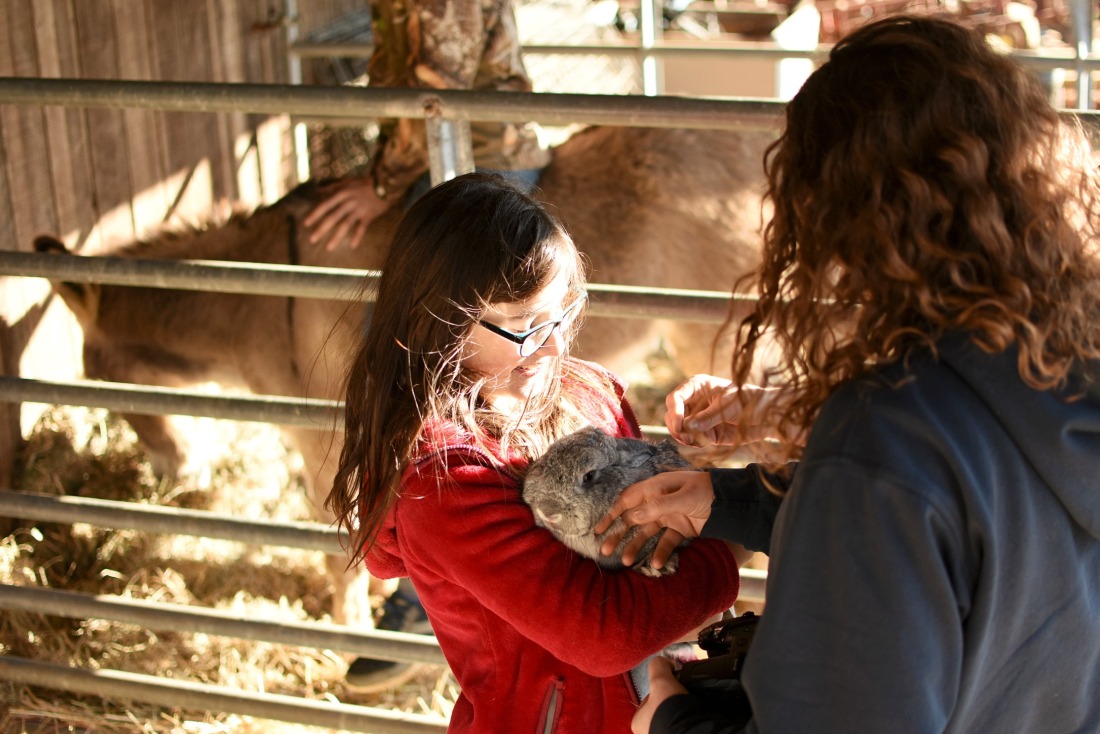 BAHAHA, THIS PICTURE. Jeff brought out his slightly creepy rabbit, Olaf ,and decided to take her (yep, it’s a her) for a ride. Olaf was significantly less enthused than Jeff about this endeavor. 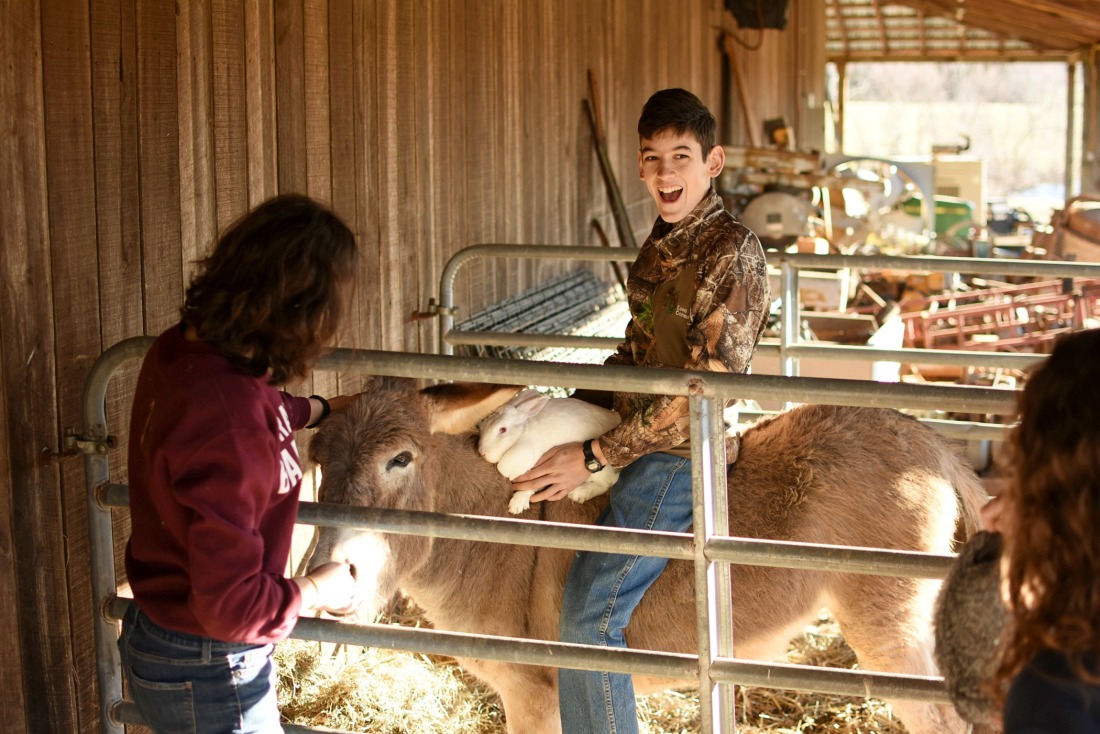 Poooor Olaf. :’D What a hard life for a bunny. But she survived it and was rewarded with many laughs (some of them over her large dewlap and largeness in general – it isn’t her fault she’s a meat rabbit breed!).

*grins* My, that was a fun day. Good memories, good memories. I’m glad to have a camera for things like this to cheer me up on cold, gloomy days. I hope this brought a little sunshine to yours too. 🙂 ❤

Which picture was your favorite? Does the hay barn look exhilarating or mostly dusty? And would you wade in a creek in winter?

Welcome to my house. ✨ I don't think I'd be brave enough to paint the wall behind my front door black, but I love how it looks in a painting at least. 😂 What about brightly colored doors - are you a fan or not?
Poem postcards from my new poetry book! I love how these sunflower prints turned out and I have one hanging on my wall as a reminder to live out the truth. ❤️ Click the link in my profile to find these and other art prints in my shop!
I got to paint the cutest puppy for the pet portrait giveaway winner. 😍 Hours of staring at pictures of this ball of fluff? Fine by me! Check my stories for a "tap to paint" version of this painting.
🎉 GIVEAWAY🎉 I'm so excited to kick off the release of my third poetry book, "Seeing Beyond," with a fun giveaway! Slide to see the prizes and more details about the book. To enter the giveaway, click my blog post link in my profile and fill out the entry form. Check out my stories for more sneak peeks and to see all the illustrations and art I put inside this collection!