I haven’t posted pet photography in a while, have I? I decided to remedy that today since you guys seem to quite enjoy pet posts – as do I. 😉 I recently took several pictures of Eeyore, my sister’s pet donkey, as well as some cute pictures of our yellow lab and some… interesting photos of one of our bunnies, hee hee. Enjoy the fuzziness!

Firstly, Eeyore. Despite her name, she is indeed a “she.” Just so you know. 😉 Eeyore has gotten much tamer since the last time I posted about her, and now Megan can ride her!

Well, let me rephrase that: Megan can sit on Eeyore’s back. I don’t know if you could call it riding when Eeyore just stands still and eats grass most of the time.

Grass is one of Eeyore’s favorite things. Especially grass on the other side of the fence. *nods* The grass is always greener, you know. She’ll even put up with wearing this annoying blue contraption and being attached to an annoying rope if it means a chance of grass. 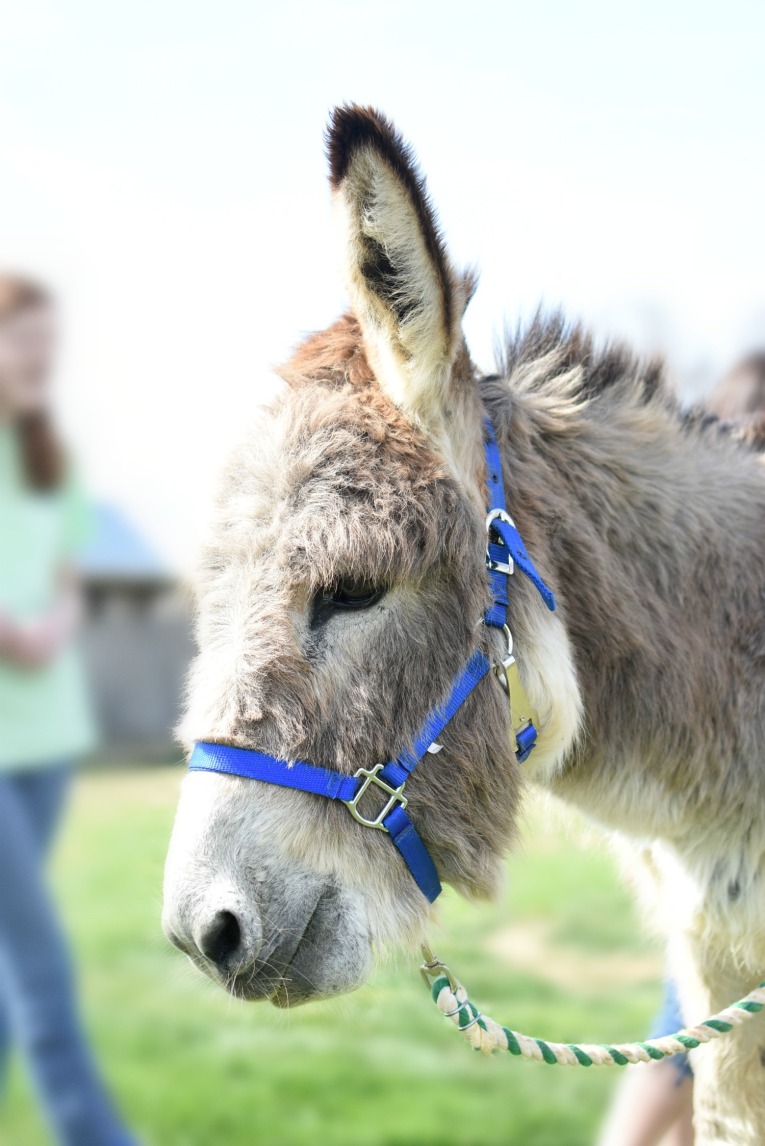 We had some friends over the day I  took these pictures, so Eeyore was the center of many attentions for a while. And the recipient of many offerings of fresh-plucked dandelions. 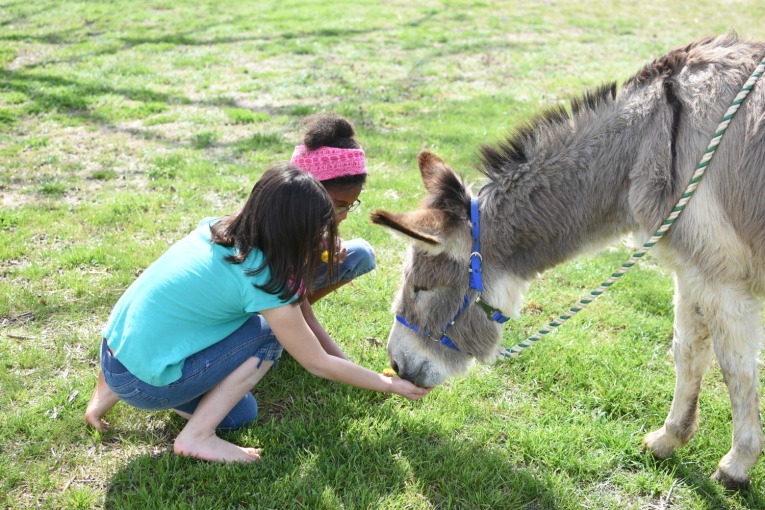 Sometimes she deigned to receive them, and other times she just sniffed and went back to her beloved grass.

My youngest sister, Carmen, found the donkey brush and groomed Eeyore while she ate. Donkeys are apparently prone to rolling in dust. (Side note: we actually have dust now instead of mud! Or we did… It’s raining as I type.) Her fluffy coat gets so dusty that large brown clouds will float over you if you pat her too vigorously. :’D

So yes, grass makes Eeyore happy. What makes her unhappy? Being separated from it, of course. There inevitably comes a time when that exasperating human tries to shut her up behind the fence again. Eeyore will not stand for this outrage. Actually she does stand for it, and very firmly and stubbornly, too. 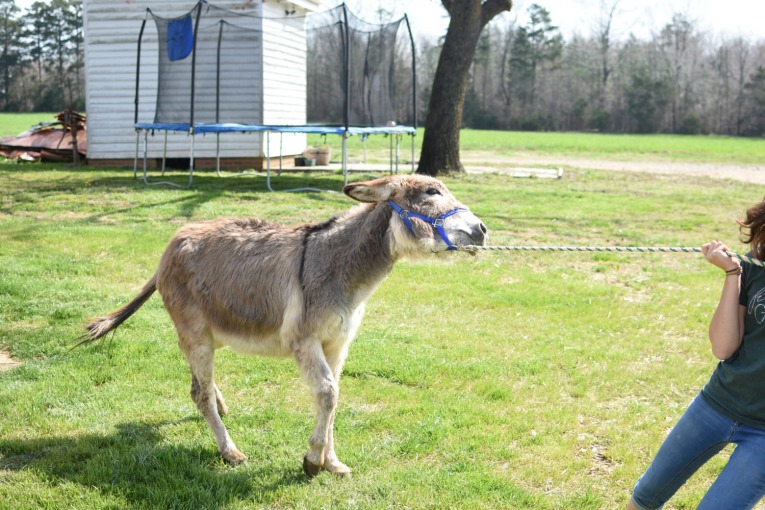 Eeyore is trying to teach Megan not to keep repeating the same mistake, but Megan doesn’t seem to be a very fast learner in that respect. Eeyore doesn’t find it as amusing as the humans seem to.

At last, after much pulling and tugging, Megan always succeeds in getting Eeyore back to her home. After she put her back this time, we stopped by the rabbit pen and brought out poor, forgotten Olaf for some attention and pictures. Ironically, Olaf is also a female with a misfit name. Beginning to see a pattern here? XD 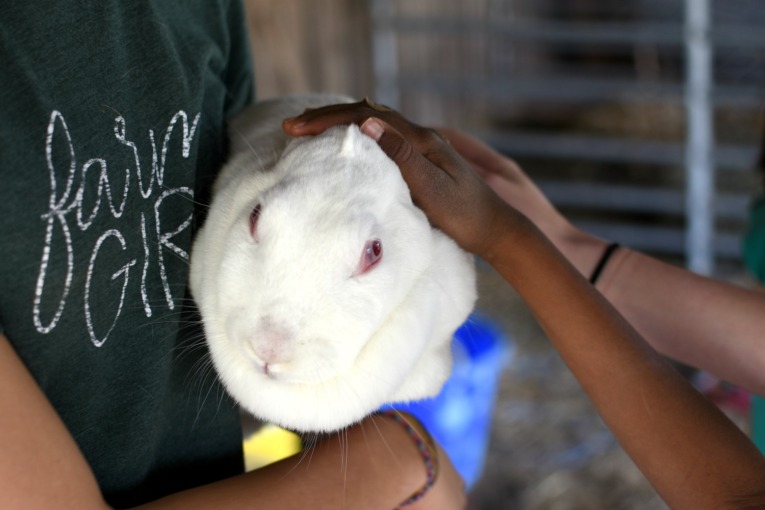 By this point you can probably tell why Olaf doesn’t get much attention or pictures. She mostly gets laughed at, poor thing. I suppose she can’t help being a meat breed rather than one bred for beauty, but still… SHE CRACKS ME UP. 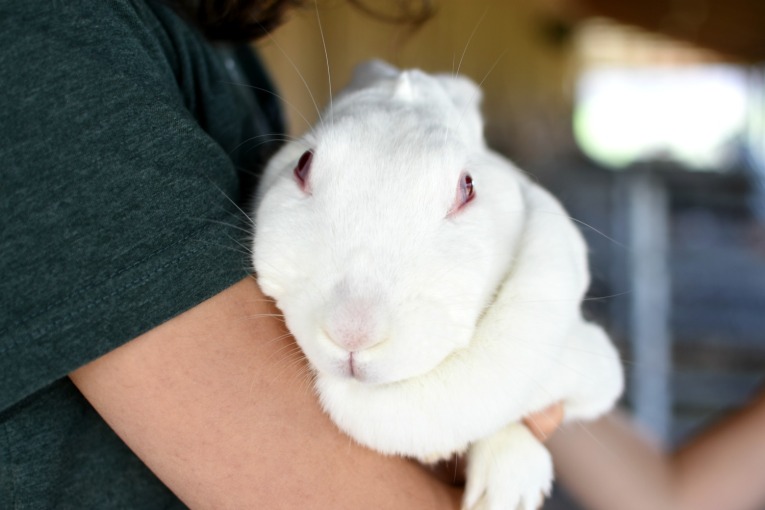 I’ll spare you more creepy-pink-eyed-rabbit pictures and move on to our last subject, Maggie. Finally, a pet with a gender-appropriate name! XD She’s normally quite sweet, despite her rude behavior in this picture. 😛

One day when I was taking pictures, she nonchalantly hopped up on this stump and looked noble. Or tired. Maybe both.

Aww, I love this picture! Such a cute pup, don’t you agree?

That’s all the pet pictures I have for you today, my friends. I hope you enjoyed!

Which photo was your favorite? Donkeys, bunnies, or dogs? Do you have any strangely-named pets?

77 thoughts on “How to Make Eeyore Happy {+ More Pet Pictures}”