The other day I went out with my camera before breakfast to take some pictures of the Canadian geese on our pond. It was a lovely sunny morning with blue sky, blue water, and a shy tinge of green starting to show through winter. I spent quite a while down there and got MANY pictures, a few of which I’ll be posting today. 🙂

I hope you enjoy “birdwatching” with me! 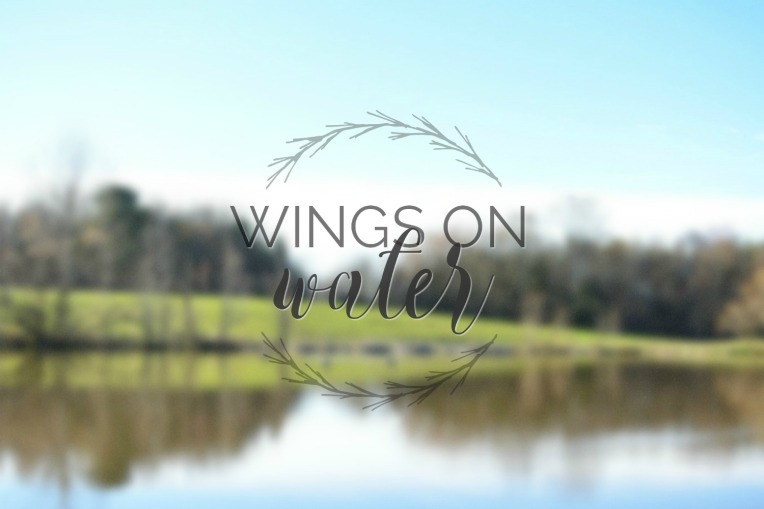 Let’s start with the setting. My brother, Jeff, has cleared out many of the scrubby trees around the pond since I took these pictures, but they came in handy for adding interest to pictures that day. 😛 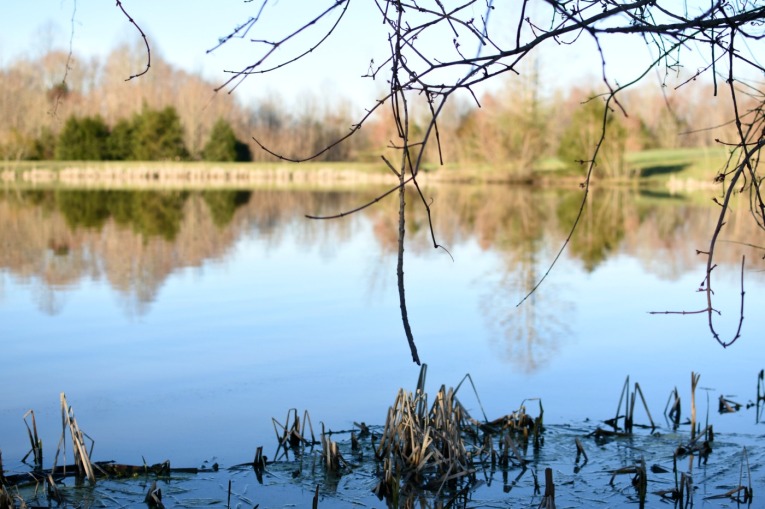 I love how the brilliant blue reflection gathered along the edges of the pond contrasts with the silhouette of this ordinary ol’ bramble. 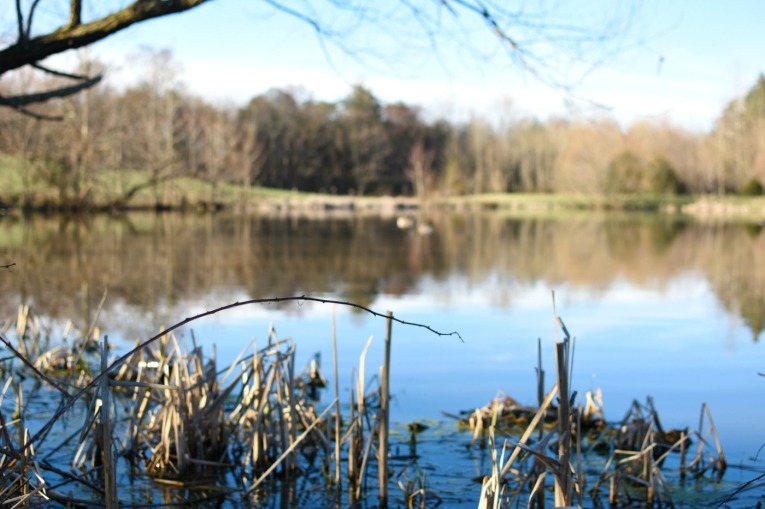 Okay, now we get to the geese! There were actually three to begin with, but the one guy kept to himself around the edges of the pond and let this pair “test the waters” closer to me. The waters must not have been great because they never got very close. XD Alas, no zoom lens… 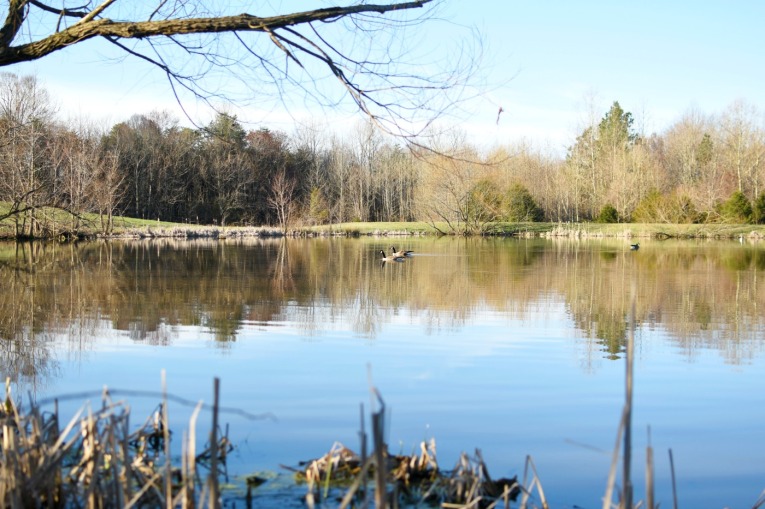 I eventually tired of hunkering down by the muddy edge of the pond, waiting for them to come closer, and switched to standing on the dock. Where… they were even further away. Great. 😛 But I love the green and blue in this picture. So springy!

Eventually the pair became curious and cautiously, serenely, came a little closer to check me out. And to preen, apparently. XD It looks like he’s trying to hide or something. I’m not THAT scary, am I?? 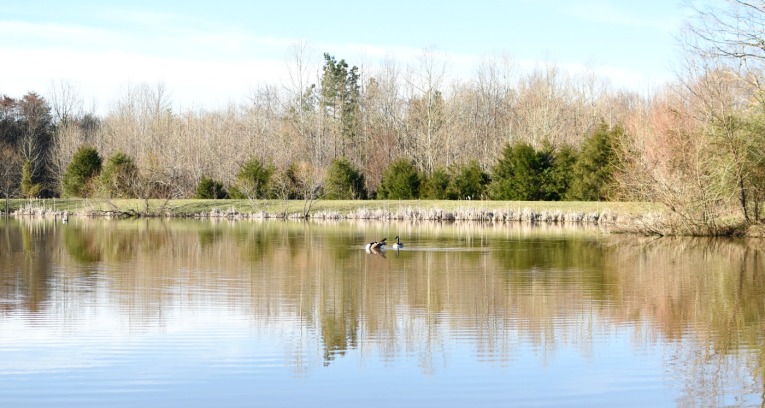 Occasionally I would turn away and take pictures of something else in hopes that the geese would come closer, but it didn’t usually work. 😛 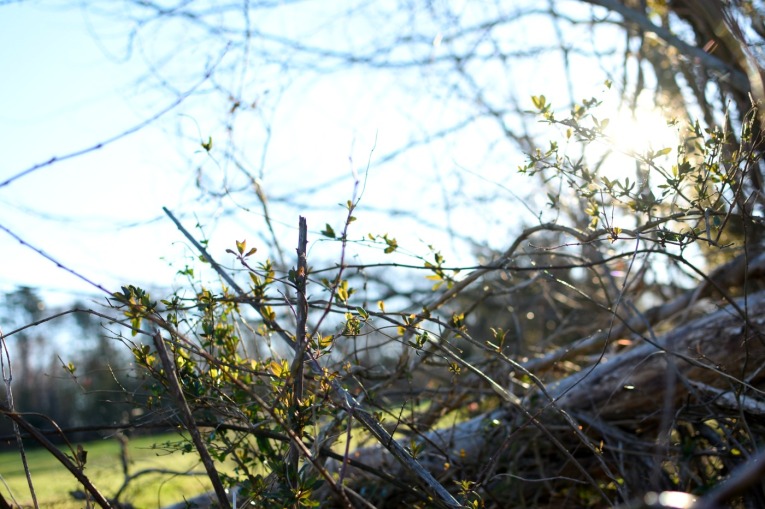 When the geese started swimming further away, I gave up and decided to go back inside. BUT THEN! Just as I was turning back, I heard honking and another pair of geese flew in. 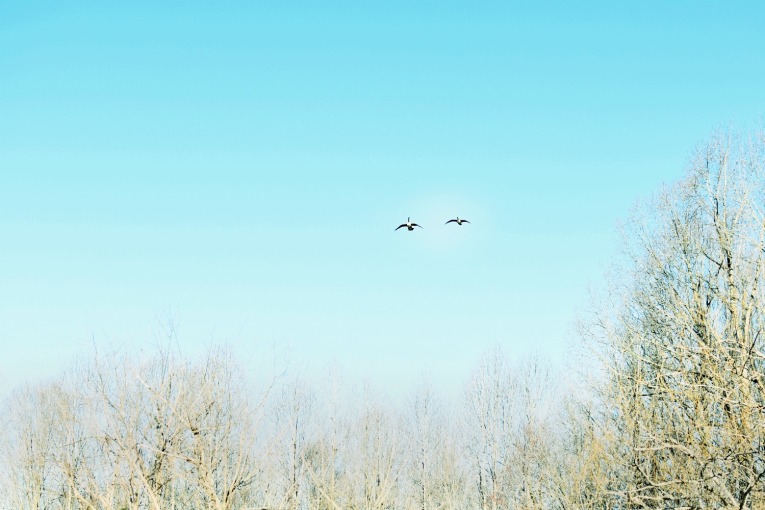 They created quite the racket, let me tell you. Maybe the geese already settled on the pond were trying to warn the newcomers of the strange creature on the dock, or maybe they were just desperate for company, because they honked frantically for about a minute while the new pair circled widely around me. I was quite pleased to capture them in flight! 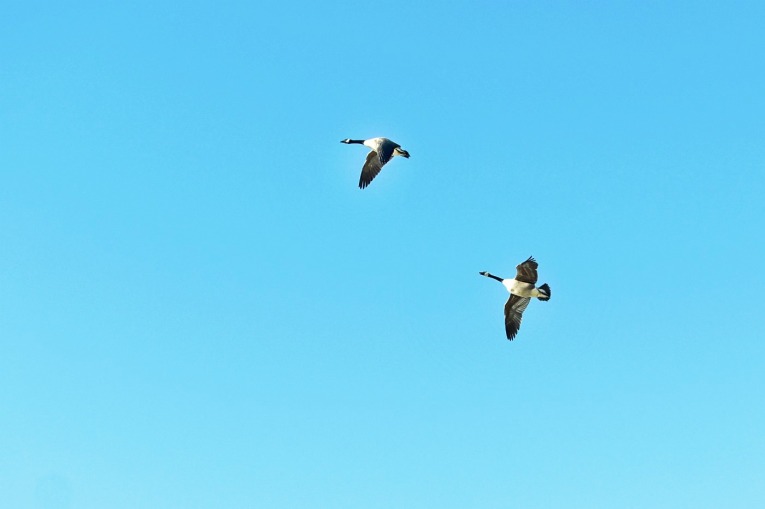 I realize this is a pretty poor picture, but look! If you zoom in, you can see the two geese finally coming in for a landing with feet out and wings spread. It was so neat to see and capture. 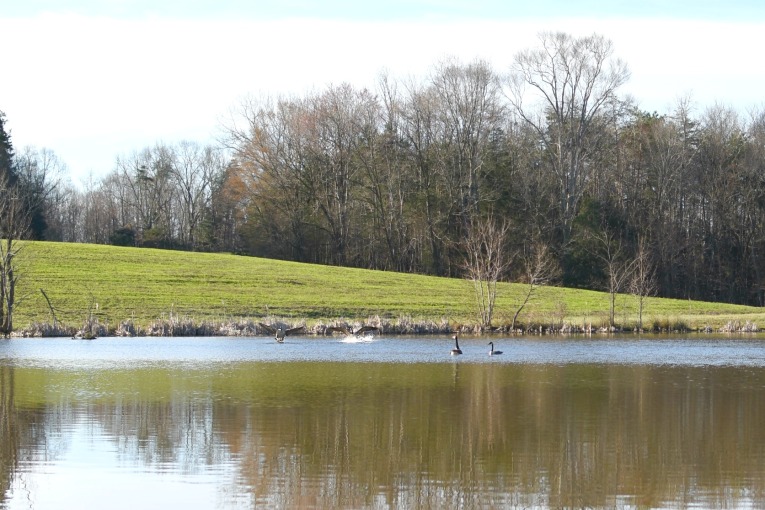 The new geese must have been more courageous, because they came fairly close to me while the others retreated to the far side of the pond. I love how springy these pictures look! ❤ 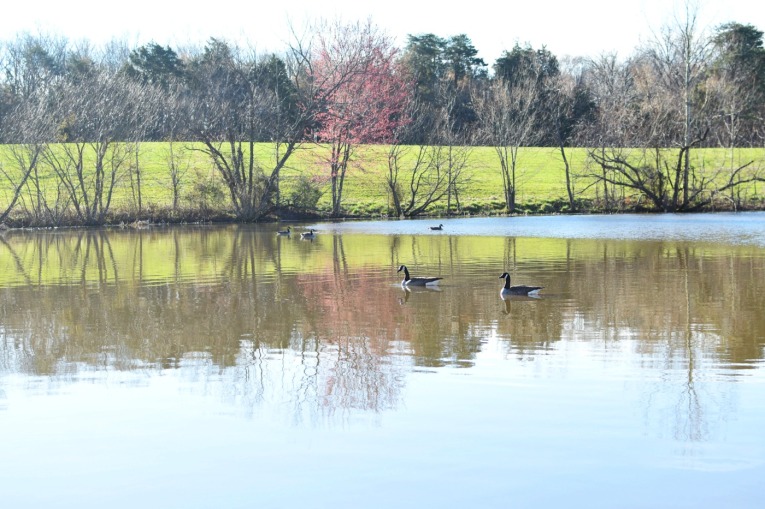 I got a BUNCH of pictures of one or both of the travel-weary geese quenching their thirst. 😛 It was really neat to watch them dip their heads under water and fling them back to swallow. They were kind of messy drinkers, though, as you can see. XD 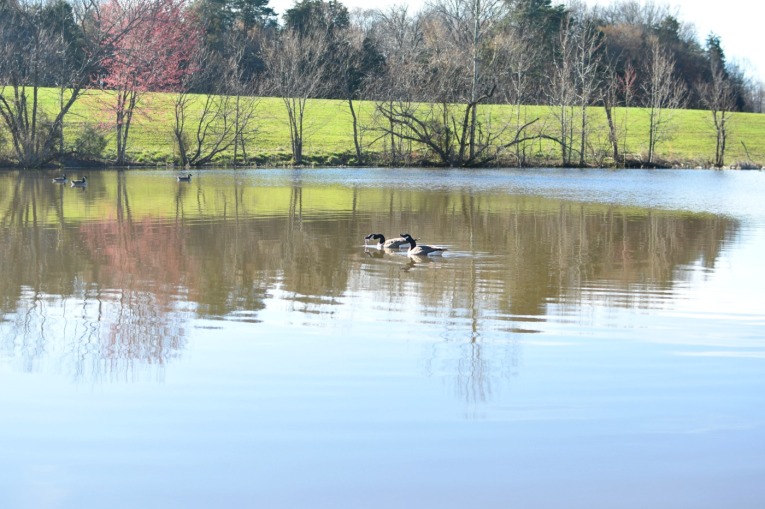 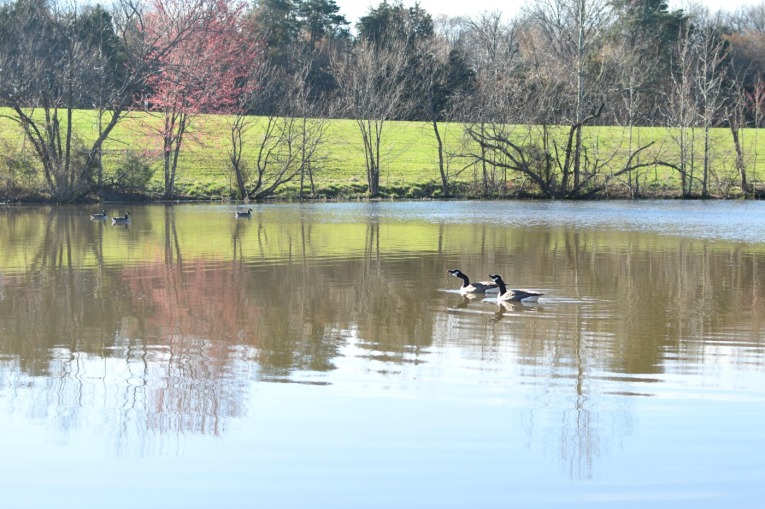 Canadian geese look so regal and peaceful in the water, don’t they? They seem to glide effortlessly, although I’m sure their webbed feet are churning underwater. 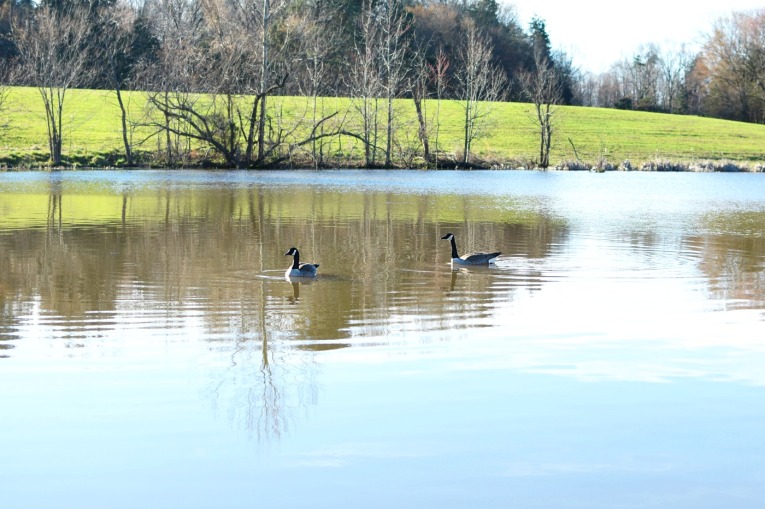 And with that, we’ve come to the end of the pictures for today! I hope you enjoyed these springy photos, my friends. Our redbud is getting ready to bloom, so look out for more spring photography coming up! 😉

Which photo was your favorite? Do you like birdwatching? Is spring coming where you live too?

47 thoughts on “Wings on Water”

Watercolor pomegranate. ✨ Thanks for the suggestions on my last sketchbook-fruit post, guys! I love how this piece turned out. Tasty. 😋
"The Scream," but make it happy. 😄 You know that famous painting by Edvard Munch? Well, I wanted to make a more fun and less creepy version the other day. It still turned out creepy, I mean really... But at least it's happier. 😂
Not the usual kind of art I post, but these little guys were too cute not to share. Air dry clay gnomes are a super fun project to do with kids (or, you know, just for fun)! Which one is your favorite?
What happens when I doodle with a paintbrush... One of my favorite "art prompts" is to use the leftover paint in your palette as inspiration. I wouldn't normally choose a warm color scheme like this, but using it made me happy and so does the finished spread. It's not fancy or super artistic, but I thoroughly enjoyed creating it, so I think it's a success. ❤️