How is everyone today? Are you guys getting as much sopping wet, cloudy weather as we are? MAN. Sunshine is a rare occurrence these days. *shakes head* Well, if you’re in need of some cheering up, I have a fun, sunny post for you today! Last month (yep, I’m behind in posting XD) two families from our old church came up to visit us and we had a ton of fun with them. ❤

With the first friends that came, we went down to the lovely stream on our property to explore. And… get wet, as it turned out. XD XD But let me not get ahead of myself…

Ahem. There are SO MANY BUTTERFLIES on our farm – I love it! That day there were some gorgeous swallowtails by the creek. Butterflies are just astonishingly beautiful. ❤ 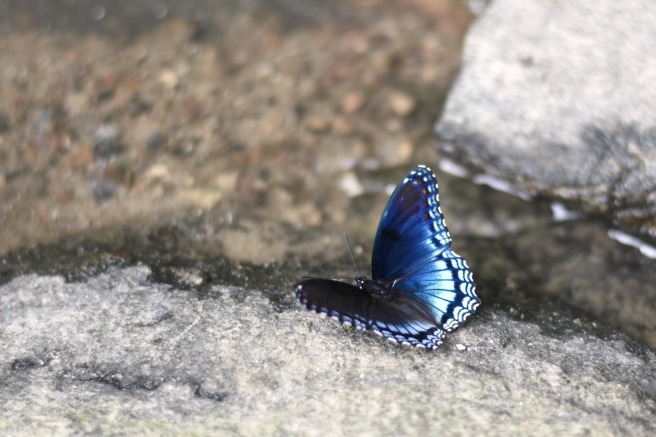 We also found some jewelweed which is supposed to help poison ivy? I don’t know – has anyone tried it? Not me. I wonder if it helps mosquito bites, because I got a TON from… well, that’s a story for another post. 😉

Not sure what the boys were deliberating here, heh heh.

Right as we entered the stream, one of us saw a crayfish hiding in the water. Megan (my sister), was like, “WHERE, WHERE?” She finally caught it but MY, it was fierce! It pinched her and hung on, which was hilarious to see but apparently rather painful for Megan (she was laughing, though). :’D

Maggie, our yellow lab, came along with us and decided she wanted to cool off. It’s funny because even though she’s a labrador retriever, she doesn’t like going in deep water. She just prefers wading. 🙂 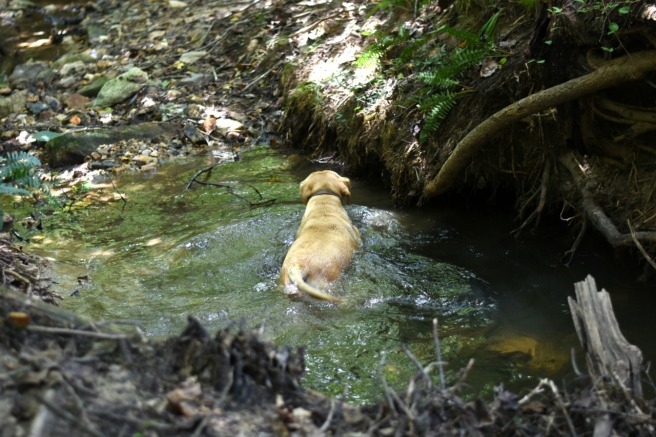 Well if you know Megan, you can probably guess what comes next… she decided to cool off too. XD XD Yes, even with normal clothes on – it was warm enough that she would dry off quick, she said.

She ended up COMPLETELY DUNKING herself and getting drenched. :’D Why am I not surprised? (Also side note: LOOK AT THAT BOKEHHHHH.)

After Megan got wet, Jeff said he would do it too… and lived to regret his words. After a bit he changed his mind and decided he didn’t really want to, but we all held him to it, hee hee. On the way back he finally agreed. XD HA HA THIS PICTURE CRACKS ME UP. I think some of the boys got impatient for him to dunk under already and splashed him by throwing rocks into the puddle, which he pretended to get mad about. XD 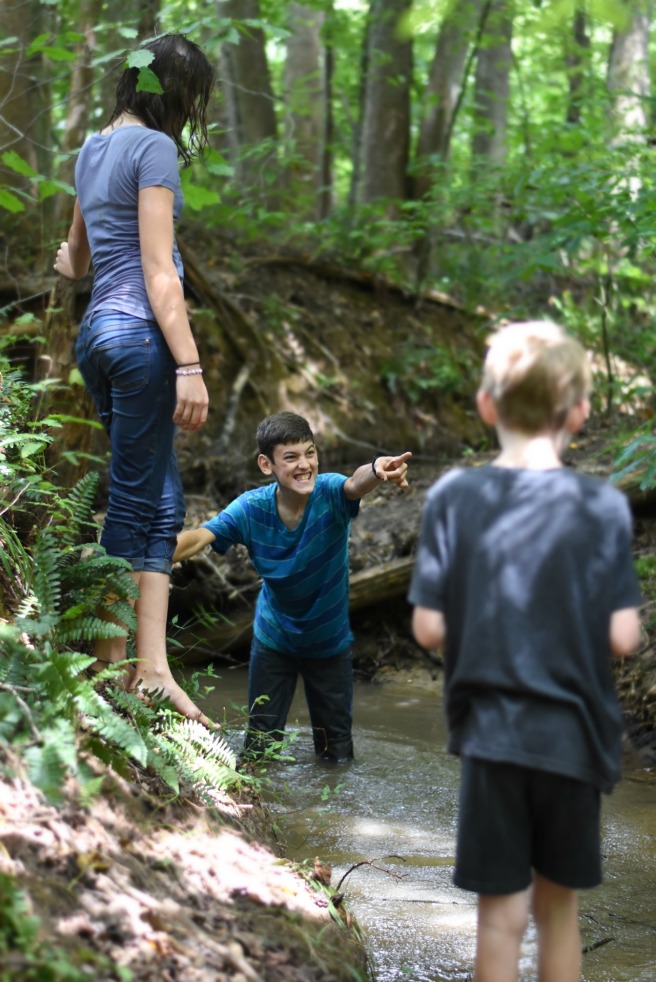 IT WAS HILARIOUS. He thought the water was QUITE cold and, as you can see, he was very expressive about it. XD XD I’m so glad I got these pictures!

I just love this stream – it’s so peaceful and charming and pretty. ❤

Ohhhhh my, doesn’t this just look magical? I think that hole would be a perfect spot to build a fairy house, don’t you agree?

Well, anyway, after that little adventure we made our way back up the stream. And guess what? I saw another butterfly! 😀

We all loaded up in the Mule (UTV, not animal), and roared back the way we came: through a rather grown-up path between the corn. And that’s the end of that! 😀 It was great fun. *happy sigh*

Now for the second walk! Some other friends spent the night at our guest house on the farm, which was GREAT. It meant we had more time for doing things like visiting a super tall bridge/hike/trail nearby! 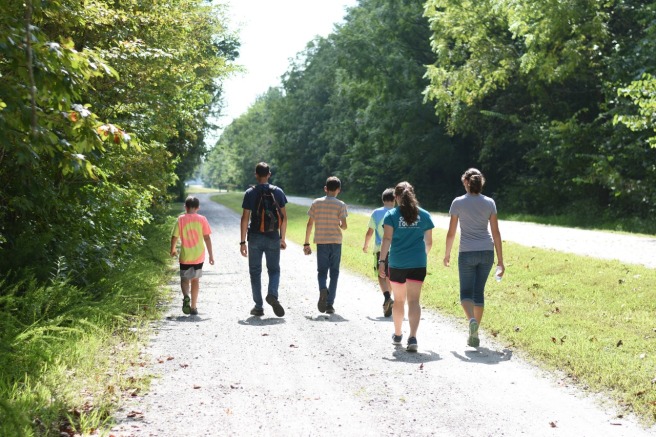 We saw this strange but pretty vine growing on a tree beside the path. It looked kind of like a cross between a grape vine and wisteria, but I don’t think it was either.

OH YES, and then we found a snake! I’m not fond of snakes in general, but this little guy was so cute that he was an exception. Snakes are extremely strange, aren’t they? They don’t have legs but they can move and climb so fast… and even tie themselves in knots! 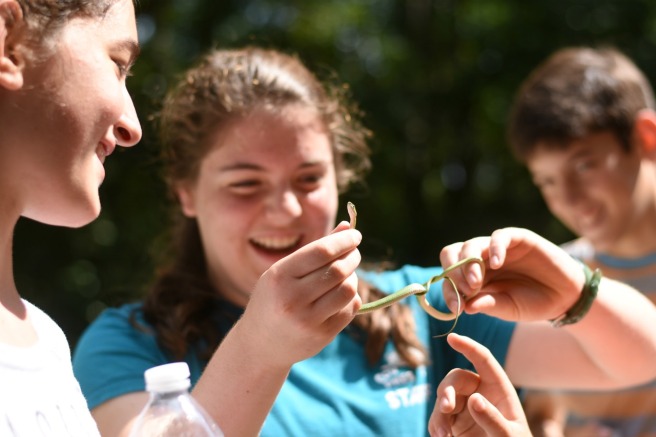 OKAY I LOVE THIS PICTURE. It’s one of my favorites in this post, actually! I’m aware that yes, it is a picture of a SNAKE, but still… I think it’s so pretty for some reason. ❤

He really was like a little vine come alive – and such a brilliant shade of green!

Alright, alright, I’m done with the snake pictures now. You can open your eyes. 😉 Now for the bridge pictures! The bridge was so tall it was higher than the trees. O.o It was quite sturdy and safe, though, don’t worry. 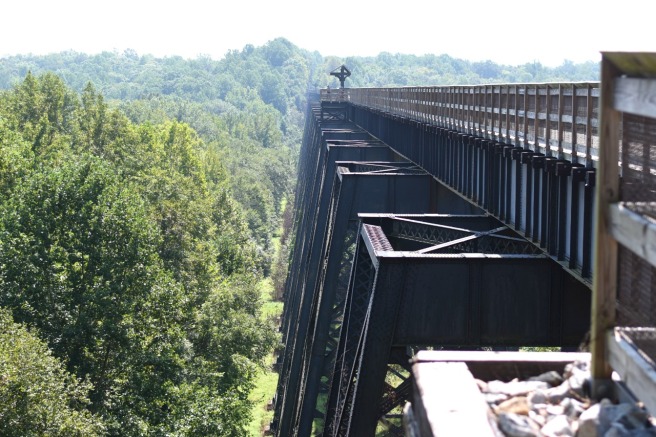 I forget if I meant to get my mom in the picture or not, but I like how it looks anyway. 🙂

The bridge is REALLY REALLY LONG, but thankfully it’s broken up by little overlook stations. Or more like downlooks, judging by the photo. XD 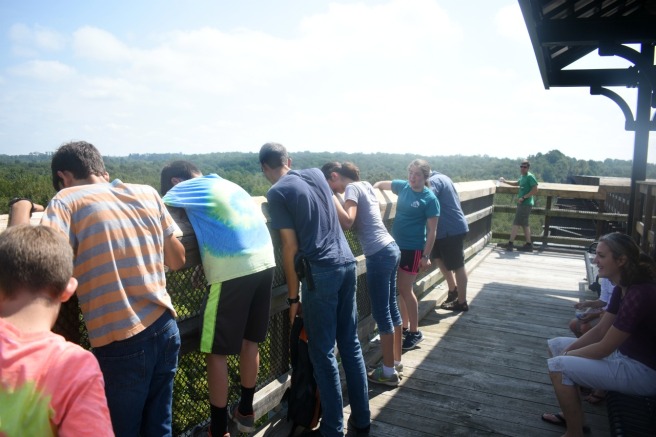 It was fun to cross the bridge, but MAN it was hot that day.

Hee hee, my youngest sister Carmen walked with her friend and it was so funny – they were making up poems together. 😀 🙂

We had crossed most of the bridge before we actually came to the river… which was rather brown and muddy, as you can see.

Some of us walked (I mean ran) to the end of the bridge after that, and then everyone went alllll the way back. Some of the kids (and a few adults XD) tried to run their hands over the wire grating fence thingy along the sides of the bridge until we got to the end. I tried it for a little bit and it quickly made your hand numb. O.o Some of them were complaining about how much it hurt and we’re like, “HA HA, GUYS, no one is forcing you to do this.” XD XD It was pretty funny. Anyway, they made it to the end without their hands falling off, so that was good. We didn’t see any snakes on the way back, but I DID find these lovely purple flowers! YAY PURPLE. 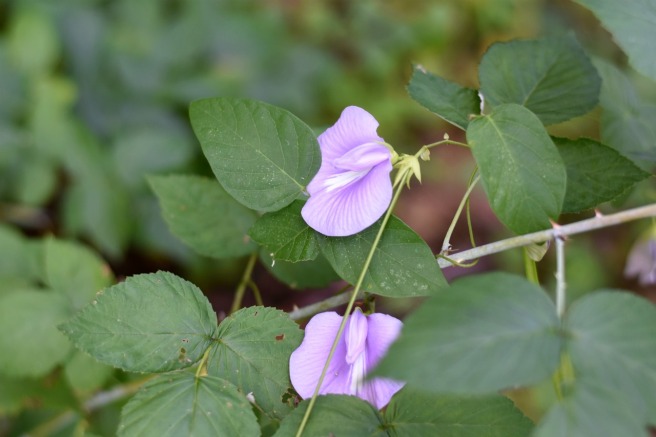 There were butterflies all OVER the gravel pathway, both coming and going, but they were hard to get pictures of since they fluttered around so fast as you walked. So the last picture I have for you is a nice sky-and-silhouette picture with puffy cumulus clouds. 🙂

And… yeah, that’s about it! Both adventures were a lot of fun, and it was SO nice to see our old friends again. I hope you enjoyed coming along with us!

Which adventure did you like best? What was your favorite picture? Would you dunk underwater with normal clothes on? And was the snake cute or still too… snake-y for you? XD

Thank you so much for reading, dears, and please have a lovely day!