Halloo, guys! I’m excited to present a simple tutorial for drawing faces! 😀 I’ve heard a lot of you say “I CANNOT draw people” or “faces are SO hard,” and you know what? I kinda agree. People can be really hard to draw. But you can do it! Today I’m going to show you an easy way to draw a face with just a pencil and paper, and then I’ll show you some different combinations you can use to get all sorts of interesting characters. 🙂

So. To begin, here’s how to draw an average, boring face without looking off a photo of a person. XD (I – and probably you too – can draw a better face when looking off of a picture, but sometimes you just want to make up something, right?)

Sketch out an upside-down egg shape for the face and two short curved lines below for a neck. A grid like this is nice if you need help with the placement of the features (like I do). Just draw a vertical line down the middle of the face and a horizontal one between a half and a third down the face. You can see that my sketch is far from perfect, but that’s okay. We’ll touch it up as we go.

Using the grid, draw two oval or almond-shaped eyes. (You can add more grid lines if you like, but you don’t need to.) Eyes are usually smaller than you think, at least in my case. I drew these a bit too big. Getting them symmetrical is hard, but you know what? In reality, no one’s eyes are perfectly symmetrical – look in the mirror! 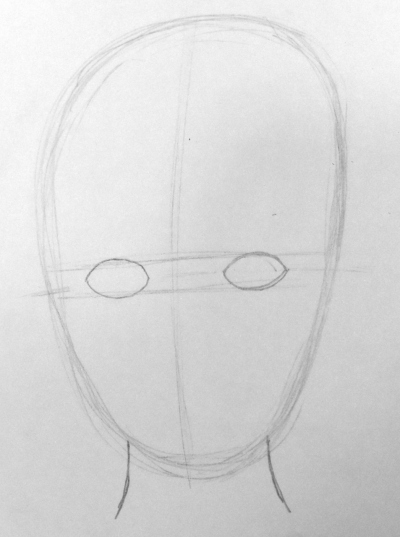 One common mistake made when drawing eyes is to draw the iris as a whole circle. Unless you are surprised or unusually pop-eyed, you won’t be able to see the whole iris. So make your circle go off the eyeball, like this: 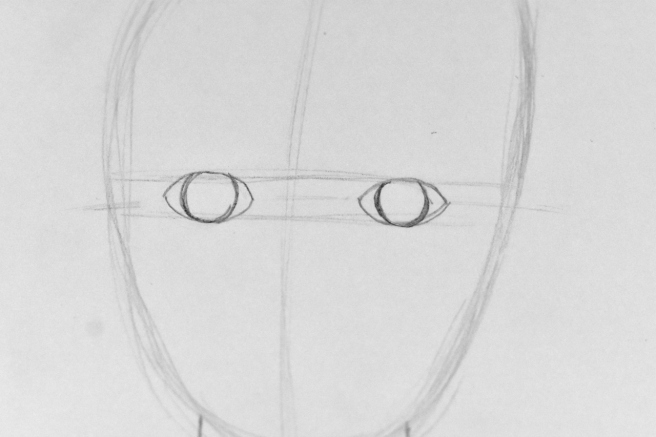 Draw a tiny circle towards one side for the highlight, and a bigger, filled-in circle (or dot) for the pupil. Also draw a curved line above and below each eye for the eyelids. 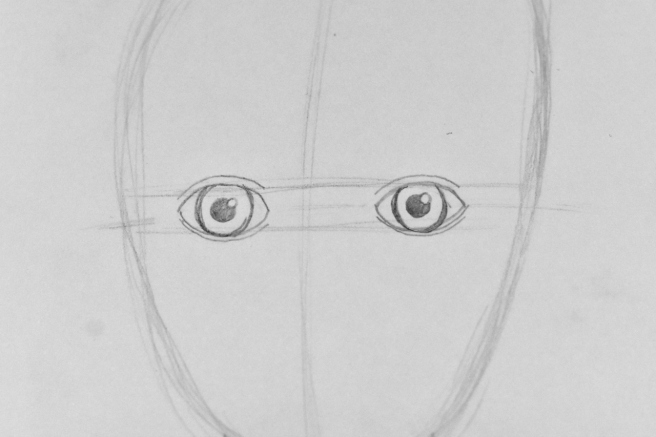 Draw the eyelashes. This can be pretty tricky, and I think I drew too many eyelashes here. From far away, you can only see a few individual spikes of eyelashes, not a whole fringe. (Again, look in the mirror if you need help.)

Heh heh, this would usually be where you color in the irises, but I kind of forgot about it until step ten. XD You can skip to there now if you’d like or just do it later.

Anyway, now we need the nose. Draw two curved lines (kind of like you did with the neck) for the bridge of the nose, and two parentheses-like curved lines below it. How far apart you make them determines how big the nose is, as well as how far down on the face you put them.

Curve your parentheses around a bit more to look like “C’s” facing each other. Then connect the bottoms with a wide curve or “U.”

For the top of the lips, make a flattened “M” shape, which I think looks kind of like a flying bird. 🙂

Connect the two ends of the “M” with a long curve. You can make it almost flat or very arched depending on how full you want the lips to be. Draw a line in the middle that echoes the curves of the top lip line.

Now I remembered to color in the eyes. XD A simple way to do this is to color a dark line around the outside of the iris and fill it in with lighter pencil. Make sure to darken especially the top of the iris to make it look more realistic. 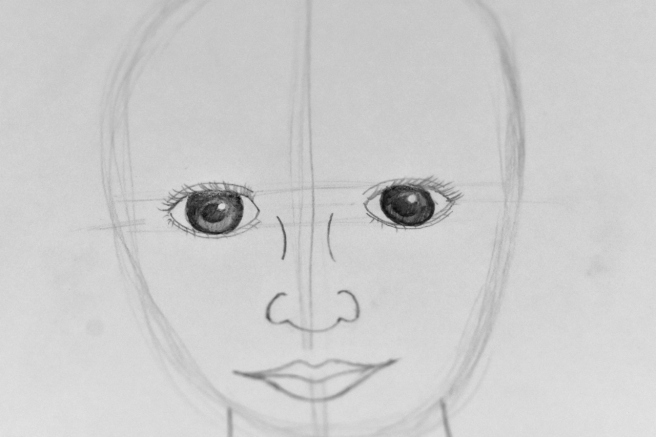 Now for the hair, which I am pretty terrible at. XD Oh well, you can tell it’s hair at least.

Using the face shape sketch you did at the very beginning, curve the hair around the head like so. (I decided to make the head a little shorter than I had originally sketched.) For this hairstyle, I kind of drew two elongated teardrop or comma shapes that meet at the middle line of the face grid.

Also now is the time to define the face shape at the jaw and chin. You kind of just have to play around with this part and experiment. A more round, curved jawline will look like a younger face, and a sharper, more angular jawline will look older or more masculine. 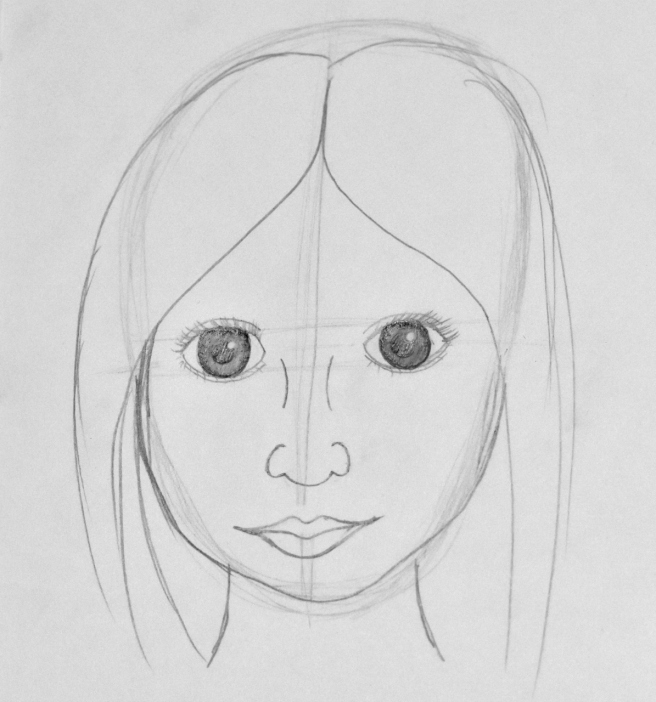 Start shading the hair. WAIT, DON’T PANIC BECAUSE I SAID SHADING. This is very simple. Draw darker, closer together lines beside the neck and at the top of the head, and lighter, farther apart lines for the rest of the hair. Don’t draw many lines at all at the top sides of the head, which will make the hair look more shiny and highlighted. Leave a little gap where the two sides of the hair meet for a part. Or just look at the picture and figure it out for yourself. XD 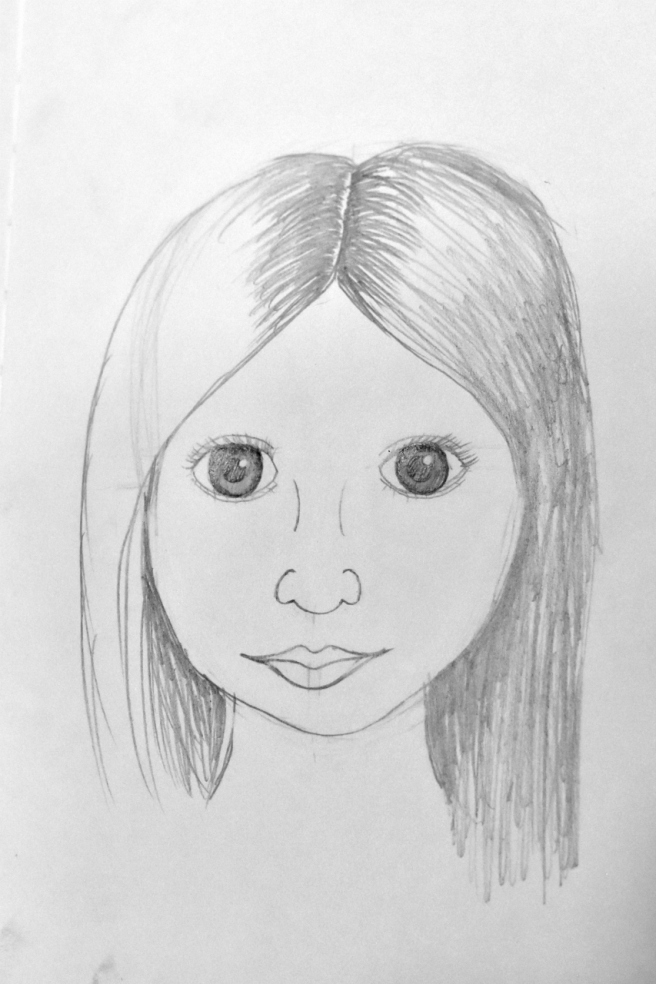 Finish shading the hair. Also *facepalm* I almost forgot the eyebrows. XD Oh well, you can add those sooner or later, it doesn’t really matter. But you should add them or the face will look kind of weird and blank. Eyebrows are simple: just draw a bunch or really short, slightly curved lines. Or you can draw just a single curved line for an even simpler, less realistic version.

Lastly, erase any grid lines and smudges, add shading around the face and under the neck if you want to (you don’t have to), and you’re done! Ta-da!

To tell the truth, this isn’t my best portrait. The face is too round, the eyes are too big… but that’s alright. This is what you have to do – if it doesn’t turn out good the first time, do it a second… and a third, and a fourth. 🙂

Now since you know how to put everything together, here are some ways to change up the facial features. It’s so fun to try different combinations!

Here’s another Art Lab post I did on how to draw eyes: Episode 23. 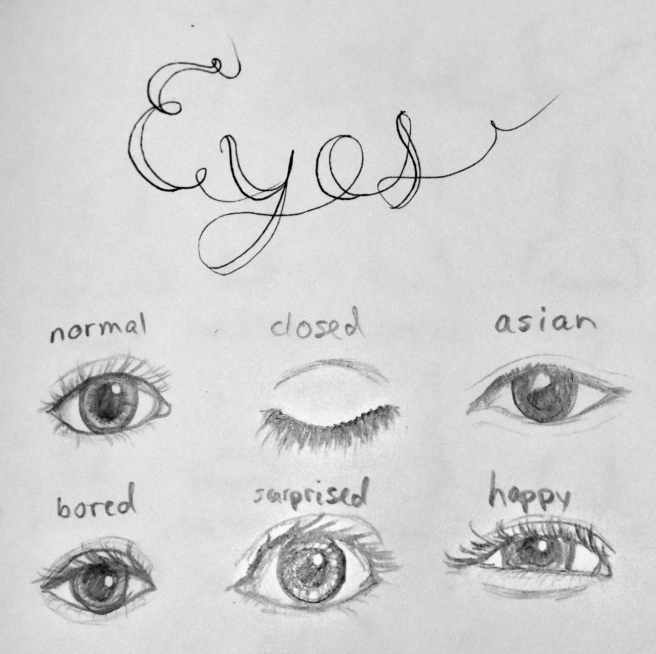 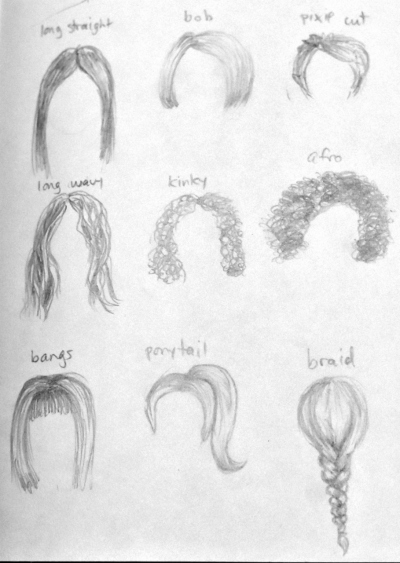